You may use resources from Radagast's pool to pay for Creature allies of any sphere. Response: After you play a Creature card, Radagast does not exhaust to quest this round.

"..he has much lore of herbs and beasts, and birds are especially his friends."
-Gandalf, The Fellowship of the Ring
Aleksander Karcz 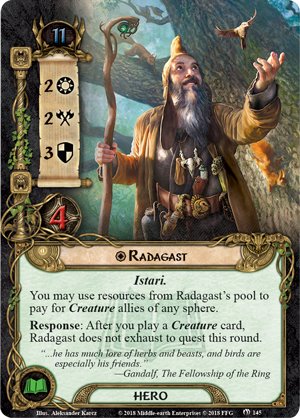 I have an urgent errand. My message is thematic, long-awaited and powerful.

Wow this is what Eagles were missing. They've always been strong but short of Vilya they have been difficult to afford. That all changes now, being Lore he is able to bring in card draw (and more importantly Word of Command which you can still exhaust to do after questing as long as you play a creature) and healing. But unlike all Lore except for Elrond he is still able to help pay for his tactics winged friends (and the assortment of new creatures in this cycle). Not to mention his staff which allows you to decrease the cost of creatures even more. Even the Descendents of Thorondor are looking like they'll see the battlefield.

About the only possible negative is the artwork leans more towards the movie version which has mixed reactions from fans. And I suppose high threat and kind of being limited or at least best with a certain kind of build where his friend Gandalf can plug in more places.

Don't forget to put Wizard Pipe and Flame of Anor into your deck for even more Radagast fun. Burning brand also has a new friend.

All in all one of the strongest heroes of this cycle of not in the top ten for the game. Which as one of the wizards is fitting.