Response: After Bob enters play, search your deck for a Mount or Pony card and add it to your hand. Shuffle your deck.

“A poor old half-starved creature it is, but he won’t part with it for less than thrice its worth.”
—The Fellowship of the Ring
Stas Dikolenko 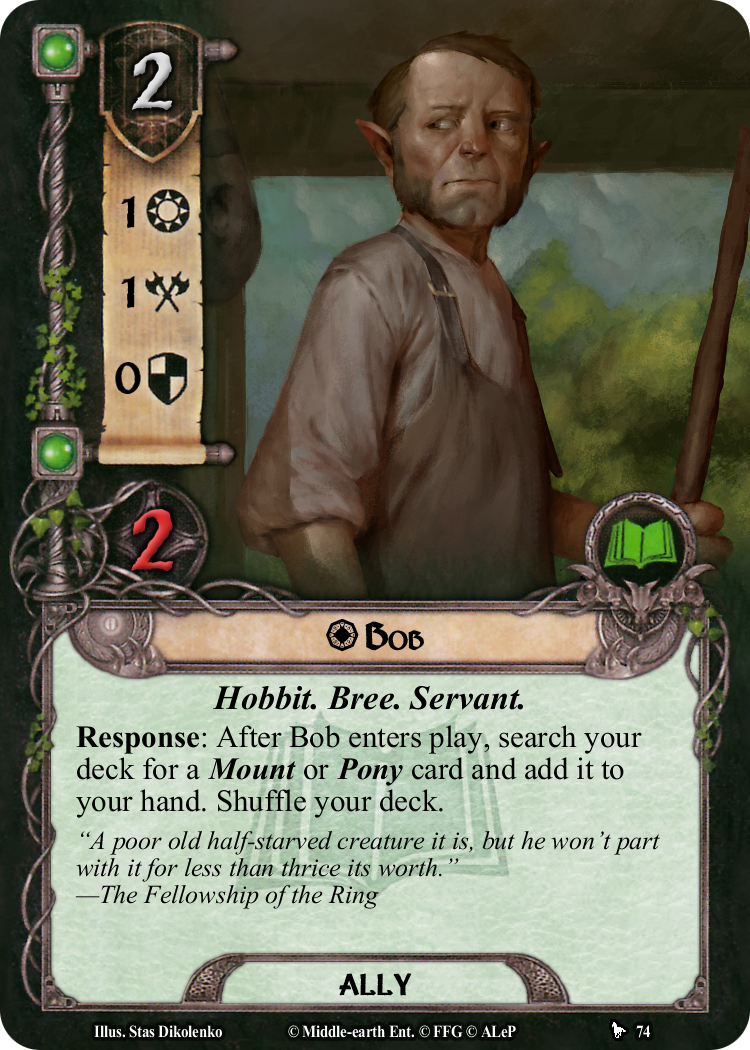 My first reaction to this card was "Oh great. Another AleP card that's over-powered." I originally compared Bob to Westfold Horse-breeder, because of their similar ability. For only 1 more resource, Bob has you search your whole deck, immediately dragging out ANY mount or pony card you want. I mean, that is on the same level of scrying as Word of Command or Gather Information, and the requirements to make those work are steeper (i.e. you have to exhaust an Istari character, or spend a round passing a side quest). Granted, Bob only fetches you a mount or pony card, but if you are playing a Gandalf deck or maybe need a Rohan mount card, he gets it for you--a little too easily.

On further consideration, I think I judged a little too harshly. One thing that limits Bob is that he is unique. You can play multiple Westfold Horse-breeder to fetch you army of horses, but you cannot have multiple Bobs (I swear I'm not trying to make a Raising Canes pun lol). Yeah, you could sneak attack him, or kill him off, but that seems like a lot of work. I think Bob is a powerful ally indeed, but A: he is , so he doesn't really have a place in my Rohan decks, and B: he is limited to (probably) once per game. One good synergy he has is in a hobbit deck, grabbing Bill the Pony to boost some hobbit HP. I do not think he is OP, and I think the designers did a good job on him, thematically as well as practically. Not loving the artwork (Why does he have elf ears???) but that's OK.

BlackArrow 265
imo its like #bilbo a pipe is about same worth as a horse. would be interesting, make it motk together with glorfindel to gain #asfaloth from the start. so for a 2 point ally at the top of the powerlevel, but not op. — doomguard 1502 7/12/22
I disagree I think there are some mount/pony cards that could be essential to your deck (yes, like Asfaloth for Glorfindel, Shadowfax for Gandalf, or Firefoot for Eomer). I see the comparison between Bob and Bilbo, but besides Wizard pipe, there's no pipe that really is essential to the board state of your deck, which could be very true for mounts — BlackArrow 265 7/12/22
Spirit Merry And Hobbit Pony Is A Combo That May Be Essential In Some Quests And Bree Pony With Spirit Frodo and Well Preserved Is A awesome combo So this Hobbit with elf ears is OP — StewofGondor1 27 7/16/22
I forgot to add that hobbit Pony and barlim — StewofGondor1 27 7/16/22