Response: After Hirgon quests successfully, play a  ally from your hand, reducing its cost by 1 (to a minimum of 1). Then, you may raise your threat by 1 to give that ally +1  and +1   until the end of the round.

"Hirgon I am, errand-rider of Denethor, who bring you this token of war." -The Return of the King
Aleksander Karcz

Beneath the Sands #55. Tactics. 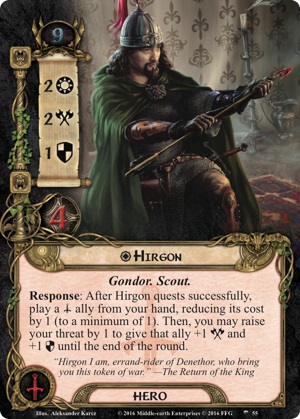 At times, there are heroes you use so often that you have to force yourself to stop using them to make room for others. As much as I initially liked Hirgon, I never thought he'd become an overused hero, but in looking back through my decks, I'm surprised how often he's slipped in without me realizing it.

There are a few reasons. One, rarely generates resources, but if you've plenty of allies, it's like he's generating 2 resources from the start. Two, as often has higher threat, many allies couldn't reach their full "enter play" potential as enemies wouldn't remain in staging until next turn, but now Descendant of Thorondor, Galadhon Archer, and even Knight of Minas Tirith can be guaranteed to get their bonus right after staging. And three, his optional bonus ability of granting +1 and +1 can sometimes make all the difference.

Other allies he's fun to use with are Marksman of Lórien to take out a new enemy, or Meneldor, at times exploring a new location completely. And if you've ever played Beorning Skin-changer for a mere 1 resource to then upgrade into a Giant Bear... well... it feels like Christmas. Of course, getting any costly ally cheaper feels great, whether it's Legolas for card draw, Honour Guard for wound prevention, etc.

Late in the game, you may feel you have extra resources, but that's because Hirgon did his job by giving you fast board presence and maintaining control. In those moments, it's gratifying to see all these expensive allies in play, which weren't nearly as costly as they appear.

Still, Hirgon, as much as I love ya, I'm gonna have to retire you for a while as you've been sneaking into my decks... although I have this one deck in mind that you'd really benefit... and that upcoming scenario is combat heavy, so you'll need to stay close... and I've been meaning to try Théoden again, who'd give you 3 , and you did give him The Red Arrow, which would be thematic...

A card with lots of potential. A solid low-threat hero in a sphere with relatively few, with meaningful traits. The ability is clearly powerful - providing both consistent cost reduction and allowing the play of allies with more information - you can pick your ally (and choose if to pump) to match the encounter cards revealed. Because you need consistent access to tactics allies and resources to play them, Hirgon is mostly going to see play with at least 1 other tactics hero. Therefore, expect this to work better in multiplayer, where you can be more confident in questing successfully. Although Tactics questing is being pushed, it still lags behind and the Hirgon deck is best suited for combat allies over questing allies.