Action: Discard Beorning Beekeeper from play to deal 1 damage to each enemy in the staging area.

"We are getting near," said Gandalf. "We are on th eedge of his bee pastures." The Hobbit
John Matson

Conflict at the Carrock #28. Tactics. 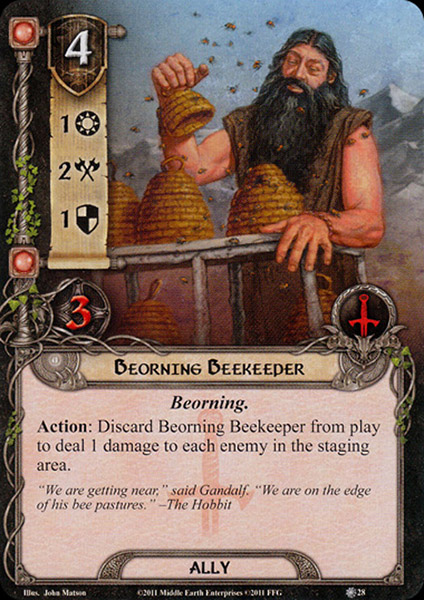 Finally, the Bee Boy has had some new life breathed into him. There are so many ways now to get him in for cheaper now like Mablung and Hirgon, but there is also one specifically made for beornings, that's right the Beorning Skin-changer. This Skin changer allows us to play him in for two resources cheaper than before, making him viable. Also, the fact that his ability discards him rather than shuffles him back into your deck(like core Beorn and the new Giant Bear) allows the beekeeper to be brought back to life from the discard. The Beorning Skin-changer can target a beorning from your hand or discard pile which lets us play him again if we so choose.

His ability is actually quite good, just too expensive for four resources. I would consider him worth it with the skin changer to use his ability. One thing to consider is that you don't have to use his ability as soon as he enters play, you can use him for a few rounds to attack or defend or quest and then use his ability when a group of enemies appears. Also, he can work quite well with Thalin who does direct damage to the staging area and with Argalad who also damages enemies in the staging area to pick some off. His ability works much better in multiplayer because more enemies will appear in the staging area like that. If there happens to be three or four enemies in the staging area at one time(can happen quite often in a multiplayer game), then you would be doing 3-4 damage with him. That's not a bad deal, four resources for three or four damage. A lot of scenarios will bring in many enemies at once, so you can easily find a great time to trigger his ability.

His stats are quite bad for four resources though. Four resources for 2, not a great deal. But, if brought in for cheaper with the Beorning Skin-changer, then it would be good money spent as the skin changer only costs two resources. You could also use his health as a archery soak which can come in useful and even 1 is good in the sphere, anything helps there.

Basically, if you are going to use him, you are probably want to use him in a beorning deck to make the best use out of him.

Beorning Beekeeper is just too expensive for what it does. Many "bad" cards fall under this category, because they're undeniably useful, but outrageously expensive. So, for four resources you're getting two attack that's about half of what would be cost efficient. It does have a nice pool of HP, but with just one defense, I wouldn't look there. It does have one willpower, which is not bad for tactics. But it's ability is pretty much four resources for a couple points of attack and a damage or two. Maybe the next cycle will give the beekeeper some Beorning support, but for now, back to the binder.