Action: Until the end of the phase, characters use their instead of .

"Courage will now be your best defense against the storm that is at hand..." Gandalf, The Return of the King
Andrew Ryan 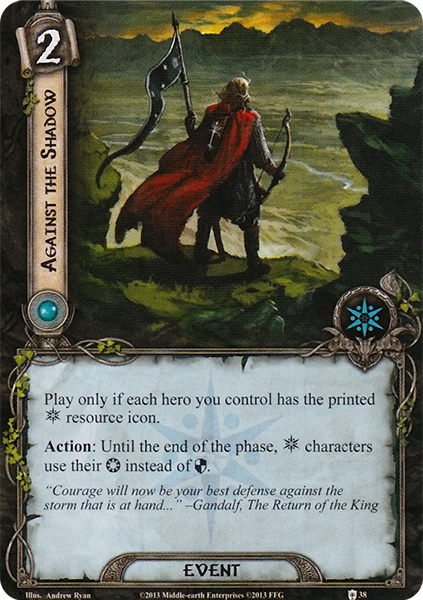 To say that Against the Shadow is a bad card would be understating it. It's not just bad, it's misguided - I'll explain what I mean by that. Most cards which are bad are bad because of issues in the balancing on them - the ability has too many limitations, or it costs too much, or something. But this card is not only that, it is also misguided, by which I mean it's not just that the effect is too expensive and too limited, it's also an effect which arguably the designers shouldn't have been trying to create in the first place.

Slight sidenote: it just substitutes for regardless of what you're using it for, so you could use it to let your mono- deck quest normally against a Siege quest, and that's probably one of the best uses of it. On the other hand, if the quest is consistently Siege then a better solution might be to just bring a different deck. Stage 3 of Druadan Forest is Siege while the rest is normal questing, but that stage also has you attack with , so it's not like your questing power is all going to waste there. I suppose it could be a valid consideration for Assault on Osgiliath to let you not care about the location which makes it a Siege quest while active, but that's it really. Other than that we're talking about the even less worthwhile idea of having your characters actually defend with their

The issue is that while defending with your sounds great for a mono- deck, it's generally going to be impractical because it's asking you to use a character for something they shouldn't be trying to do in the first place. characters should be questing, that's what they're for. If the designers wanted to make the sphere less weak on defence, the way to do that was to give us Beregond, not to try and make us defend with our questers.

Even beyond that, it's poorly designed. One of the biggest issues with this card is that it's not a choice - all characters defend with their the phase you play this card, ignoring the fact that some characters do actually have better than , and that if you want them defending you may well try to boost it, which will be irrelevant when you use Against the Shadow. So now it's awful for Beregond, but even when it was released it was bad for Eleanor (who might well acquire a Gondorian Shield), or Elfhelm, or a Northern Tracker, and would have no effect at all for Frodo Baggins, among others. It also wastes the best defensive help had at the time in the form of Arwen Undómiel.

Then consider who you might actually want to defend with this, just assuming that for some reason they are actually ready for combat instead of questing with their . Sure, it's an improvement for a lot of allies, but they're mostly still only 2 and 1 hit point, so they're most likely going to die anyway, in which case you could just save your resources and not bother. The only really good candidates are Éowyn, Glorfindel and Pelargir Shipwrights. Now those are some decent options, but even forgetting for a moment the question of why they aren't questing with that , there is one more issue: repeatability.

You need to defend consistently over the course of a game. Against the Shadow is a 2-cost event (so if you also save for A Test of Will you can't play anything else with that round's resources) which will let you defend for one round. Granted, you can recycle events, but that's spending even more resources on trying to be kind of passable at something you're really not built for, where you could instead just build differently to be actually good at it without needing to constantly sap your resources, or leave it to another player who is built to be good at it, while you stick to thing that you're good at.

The biggest illustration of the issues of Against the Shadow is perhaps the Golden Shield, which does basically the same thing but without those problems: It costs less, it's repeatable once per round rather than being a one-shot, it adds the stats together rather than swapping, so there's still some point if your is equal to or less than your , and it only applies to the one hero you actually want it to apply to rather than everyone all at once (of course as a general rule global effects on are never going to be as helpful as targeted ones since you only defend with one character at a time).

All in all, with apologies to the designers, this card I would consider somewhat of a masterclass on how not to do it. It's poor execution of an idea which really wasn't that good to start with.