You may give Mirkwood Pioneer doomed 1 when you play it from your hand. If you do, it gains: "Response: After you play Mirkwood Pioneer, choose a card in the staging area. Until the end of the round, the chosen card does not contribute its ." 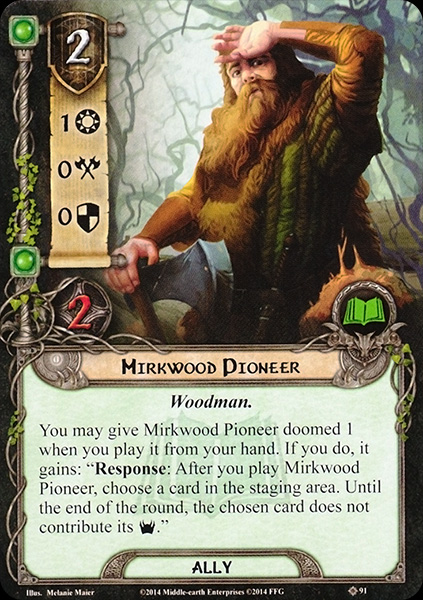 My favorite cards in the game are those utility cards who's value is not immediately obvious. Mirkwood Pioneer definitely qualifies as one of these. I can remember when this card was first spoiled, and the almost unilateral response of the community was that he is underwhelming. I shared that sentiment also, until I started playing him in decks.

The first time I played Mirkwood Pioneer was purely serendipitous. I was playing one of my favorite scenarios, "Riddles in the Dark", and was trying to stack up on 2 cost lore allies to beat the riddle mechanic. The first time I played this guy, he blocked staging threat from an enemy, allowing me just enough progress to clear the active location... and then he chump blocked that enemy allowing me to engage and destroy it. That was the first time I realized there was more to this card than meets the eye.

Firstly, 2 cost allies are always good because they fall in the chump blocking range. Even though Mirkwood Pioneer is a bit pricey for his stats (allies typically double their cost in stat points) he has the stats where they count. Defense is meaningless for a chump blocker, and very rarely do I tend to use "weak" allies in attacks. His 1 willpower allows him to quest, and his extra hit point even allows him to eat some archery damage while he is waiting to do his sacrificial duty.

Of course the true value of the Mirkwood Pioneer is his chump blocking combined with his ability, which is staging threat negation akin to Radagast's Cunning, Secret Paths, or Fatty Bolger. Staging threat negation may not seem like a big deal... until you are a few progress short of clearing an active location resulting in location lock, or fall short of completing the final quest card just before threating out. The truth is, this ability is extremely useful in clutch moments, and marginally useful for questing all of the time. Unlike Radagast's Cunning or Secret Paths, the Mirkwood Pioneer can target both enemies AND Locations (and even treacheries!), and his targeting flexibility is why I prefer him to these cards. Doomed 1 is an additional cost, but a fairly marginal one in my experience...especially in solo play.

The Mirkwood Pioneer truly shines in my mono-lore Ranger/Trap deck, where he pulls double duty. He both helps to manage the staging threat of enemies that I'm "fixing" into the staging area, as well as standing available to chump block the odd enemy that slips through my traps. You definitely want to think twice before you put this one in the bike spokes, as Mirkwood Pioneer has saved my bacon more than once.

MDuckworth83 2146
Very interesting and entertaining review, thank you! :) I agree on the flexibility value of being able to cancel whichever threat you need to. But don't you think it's a generally useful effect for questing? It is like a +X willpower, where X would be the highest threat in the staging area. I never tried him but that sounds good to me, especially considering you are paying to additionally have a guy by your side. Wow, I really need to try this card now! :) Thanks! — efrenciscus 38 4/20/16
I'm glad I could give the Pioneer some good press! Not sure if you were around when he came out, but he pretty much got trashed by the whole community....even more so because he was an early release spoiler. :) These are the cards that I have the most fun with....the ones that force you to discover how to best utilize the card. Because I can't stand playing cards like Steward of Gondor and tactics Boromir, it forces me to find fun ways to experiment with cards a lot of people breeze over because their deckspace is reserved for power cards. — MDuckworth83 2146 4/21/16
This makes me think that this could be pivotal in managing Helm's Deep. — maistrechat 81 6/10/16
3

I have mixed feelings on this card when it comes to reviewing it. It's a card I like a lot and consider rather good (though severely under-rated by some in the community, he was not so well received on release), but I also still stand by some of the uncertainties I had about its design when first spoiled and released.

So, first off, obviously those stats are nothing special. 1 , can take 1 point of direct damage without dying, these things are not irrelevant but they're nothing to write home about. The reason you play this ally is for the ability, which is a very good one. There are limitations of course - unlike the similar Secret Paths and Radagast's Cunning the card in question has to be in the staging area during the Planning phase so you can't cancel threat after staging. But especially as player count rises, having a high card hanging around in the staging area which you might like to ignore while questing is not that rare. For obvious targets, there are a few boss enemies which stay in the staging area but are not immune to player card effects, like Thaurdir in Carn Dum for example, but then there are also generic high high engagement cost enemies, and indeed high locations. Of course you could just run the two events I mentioned further up, but while they are cheaper, they're also less flexible and don't come with an ally attached. I recall a comparison I've come across for this ally is the Escort from Edoras - assuming you cancel 3 or 4 with the ability, the Pioneer will effectively quest for 4-5 the round he enters play, then stick around as 1 and a couple of hit points subsequently, whereas the Escort would just quest for 4 and then be discarded. It's a decent comparison, and expresses well why I like this card. It's good.

My problem however is in the balance of quality between the ability and the cost in resources/Doomed. Because the ability is an optional Doomed ability, it's kind of separate to the ally - suggesting that we're paying Doomed 1 for the ability and 2 resources for just the stats, which as noted are not that impressive. I absolutely think that the full package of the ally plus cancelling the threat is worth 2 resources and Doomed 1, but I don't think the ally without that ability is worth 2 resources. I think I'd be more comfortable with the design if it were 1-cost for the ally and Doomed 2 for the ability, though I imagine more people would balk at Doomed 2 for that effect than Doomed 1. The Pioneer is just an excellent example of how the optional Doomed allies all feel kind of worth it including the Doomed effect, but if you don't trigger the Doomed then they feel more overpriced like Secrecy cards out of Secrecy - but with the difference that the Secrecy cards always give full effect but may cost more, while with the Doomed allies you're overpaying and not getting the full effect because there's an additional cost associated with that effect.

Honestly, thinking about it more carefully and thanks to the fact I have played with this ally a reasonable amount I find him not so bad, mostly because if I play him without triggering the Doomed it's probably because I have a good enough board state I don't need the boost, which tends to mean resources to spare and I don't mind so much overpaying for an ally at that point. It's certainly better than the Greyflood Wanderer and arguably the Henneth Annûn Guard where it feels like they'd still be fine balance-wise if their abilities were just innate with no Doomed required. And obviously it is preferable that the Doomed is optional so you can disregard it if the effect is unnecessary, however rare it may be that one plays it without the Doomed. It's just that the fact of the Doomed inevitably prompts these thoughts of separating out the costs and make me question the division of the said costs.

Returning to the actual quality of the Pioneer though, I would like to reiterate that he's very useful, and Doomed 1 is really not that big a price to pay for that effect. Pull him out for some big quest pushes, especially in multiplayer where the staging area can get really out of control at times.