Attach to the hero with The One Ring. Limit 1 per hero. Attached hero gets +1 . Response: Exhaust The One Ring and raise your threat by 1 to cancel a shadow effect just triggered during an attack that attached hero is defending. 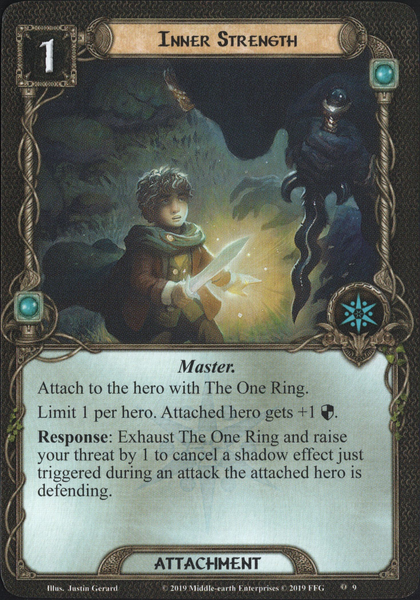 This card makes so many Grey Wanderer decks viable. Starting with The One Ring and being able to pay for this card no matter the sphere of the starting hero (due to the contract, in the first planning phase), PLUS being able to grab another 1-cost attachment and play it for free, we can do things like... well, an obvious one is that we can start with a Beregond outfitted with a Gondorian Shield: 7 and shadow canceling. The idea of needing that built-in healing from the contract is almost laughable. And now you have the rest of your deck to play with powering up Beregond's attack, or doing other fun things.

Now, that might only be viable in multiplayer, because it would be hard to get Beregond to quest enough in the early game... but, there are so many other options for starting hero... what about Elrond and Strider/Light of Valinor? Éowyn and Golden Shield? Sam Gamgee and Hobbit Cloak? etc.

I think my favorite thing about using this in multiplayer is this: if The One Ring leaves play, everyone loses. Well, okay. No problem, because if you are playing solo, the game was over anyway when you lost your hero, and if you're playing multiplayer, well, you'd have been eliminated as a player anyway, and it's no fun to try and continue a quest without everyone playing.

I think this card is a game-changer, even in non-Grey Wanderer decks, even more so than its other sphere variations, since early-game shadow canceling is so huge, and it can go on any hero... fantastic card!

blurbston 50
I love this card! I always give The One Ring and Inner Strength to Eleanor and she starts as a 3 defense defender that can cancel shadow effects, and this is all possible every game in the starting round. So she can cancel treacheries or defend enemies, leaving only Locations to deal with. Such a great card! — Christian_Medic 835 7/24/20
does anyone use Master cards for Saga quests and out them on fellowship Frodo? — BlackArrow 187 6/3/22
did not think, that was possible, but nothing speaks against it, it is exactly the same title (the ring of the saga and the ring of the expansion). you cannot select it from the start playin campaign, but if you draw it, it should be no problem to play it. — doomguard 1323 6/3/22
I mean, it doesn't fell like cheating to me (and yes, it will be more ineffective b/c you will have to draw it, but it could make for a more powerful Frodo) — BlackArrow 187 6/4/22