Attach to a hero with sentinel.

Response: After attached hero defends against an attack and takes no damage while defending that attack, exhaust The Day's Rising to add 1 resource to the attached hero's resource pool.

Out of doubt, out of dark to the day's rising
I came singing in the sun, sword unsheathing.
Éomer, The Return of the King
Jarreau Wimberly 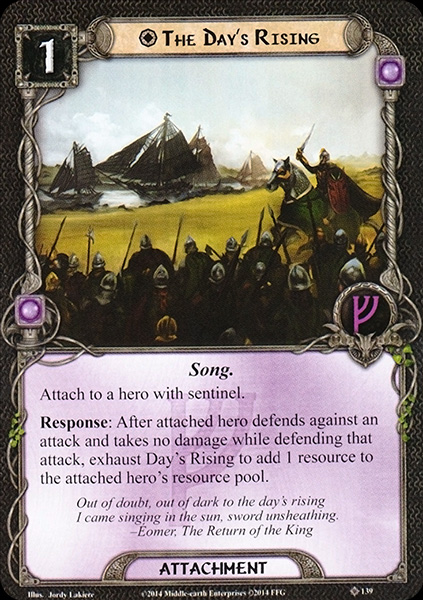 This card is solid. The obvious and pretty much best hero to put it on is my man Beregond and Beregond, but Beregond is better because you can put Gondorian Shield on him as well as Raven-winged Helm with more ease than Power Beregond. You can also use Blood of Númenor and then you can pretty much defend against anything. If you add in ways to cancel the odd nasty shadow effect, you can pretty much get an extra resource every time there is an enemy in play. That extra resource is extremely handy for Tactics in particular, as they have little to no resource generation, and it will give you more freedom on who to attach Steward of Gondor with. This card is especially good in multiplayer because then you can get your friend to go leadership and use this card on your hero, which might be better for you, and also an enemy might engage your friend instead of you for whatever reason (sometimes it is forced, sometimes you might actually want to enagage an enemy), so this card having direct synergy with sentinel just adds versatility and freedom. Also, the extra card in the staging phase can be in your favor as there is more of a chance of an enemy appearing.

Great card. Albeit a bit limited on who you can effectively play it on.

Harctor 5
I really like this card on Grimbeorn the Old too, it perfectly goes with his extra expenses. Often I put a defensive attachment or two on him, like Captain of Gondor, Dunedain Warning, or Gondorian Shield so he's usually pretty tanky — dubcity566 29 9/7/20
3

This card is viable in any deck that has a consistent defending hero. However I like this card especially in combination with Heir of Mardil. With both attachements attached to a high hero you can defend twice and get a resource for free. Obviously the question arises on which hero to play this combo. Without any further attachements only Aragorn, Théoden, Théoden and Gimli match the requirements. However I use it most often on Elrond where I use Dúnedain Signal or Elven Mail to give him Sentinel.

Blupper 10
I very much agree with your above assessment. I'd add that you could make even more use out of it by using on Erkenbrand with Armored Destrier. — Uruk-guy 505 12/16/20
I don't think this card comboes with Armored Destrier since you have to exhaust to add 1 resource so even if the defending hero defends multiple attacks it matters little. — Alonewolf87 1620 12/16/20
I think that Grimbeorn is one of the best heroes to get this onto, so that it can help paying for its ability. — Alonewolf87 1620 12/16/20