Action: Choose a player. That player may declare any number of his eligible characters as defenders against each enemy attacking him this phase.

...and when the task was done, there they would come to an end, alone, houseless, foodless in the midst of a terrible desert. There could be no return. The Return of the King
Daarken 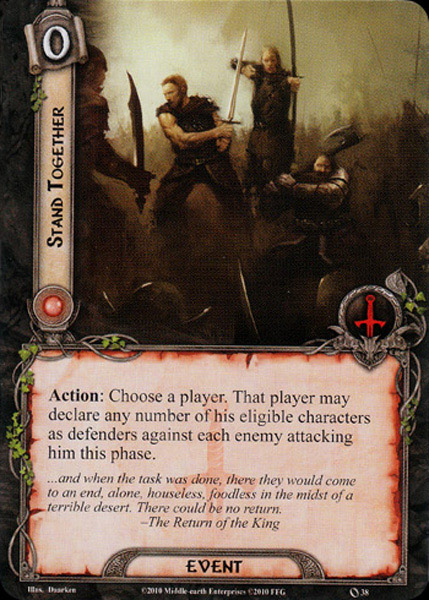 Contrary to what a lot of people would tell you, this is not an absolutely terrible card. It's just an incredibly incredibly niche card such that there are almost if not actually always better and more flexible options you could be using instead. OK, that sounds a bit terrible, but bear with me here.

The thing is, since is the one stat you can't usually pool together, you have to assume that you won't be able to do it. Stand Together is not something you can rely on, and thus even if you include it you still need to have a more standard defensive strategy, be that a powerful defender or a steady stream of chumps. With that being said, in many games you will have those moments where you have more character actions than you need and a powerful enemy to defend. Under those circumstances, using Stand Together with those extra actions as an alternative to chump-blocking could be a decent idea - and then you'll still have all your chumps available the following round when perhaps you may have more enemies. It's still niche, but it's not useless. It's most likely covering you for the fact you haven't drawn some other more useful card, but if it's a valid option then that's a kind of increase in consistency because it gives you that ability to cover yourself given a bad draw which you might not otherwise have.

OK, I'm reaching pretty far to find a use for this card other than the one thing I actually do use it for on occasion. I put this card in my 'difficult to use well' category, and it most definitely is that. Because it specifies enemies attacking the chosen player you can't even do Sentinel shenanigans which might otherwise be a thing.

So, the one purpose for which I do actually think this card has a place is when used with characters who do something when they defend. Erkenbrand and Déorwine for example can cancel shadow effects, so there might be a circumstance where you want to chump-block a boss enemy but are worried you'll get wrecked by a shadow effect, so then you can have Erkenbrand or Deorwine chip in just for their ability to cancel shadows (a similar principle would apply to a character with A Burning Brand attached, or a character with a weapon or armour would let you use Sterner than Steel). But then it has been ruled that if you have multiple defenders you still assign all the damage to only one of them so your more powerful character is entirely safe. An odd one could be if you're playing a Noldor deck and desperately want to discard a lot of cards to a Watcher of the Bruinen without getting him killed, though realistically you should have easier ways to discard those cards. You could use it as a way to damage a Derndingle Warrior and thus boost your Booming Ent, or with an Armored Destrier to discard a shadow card, but yeah OK these are getting increasingly more implausible. I think some of the ones I mentioned further up might be reasonable in very specialised circumstances, but there's only one case which I know from experience definitely works, and that is as follows:

It's still niche and easy enough to manage without it, but it's also really fun to be able to do that when it comes up, so I consider Stand Together a valid and OK card just for that one combo. There's nothing quite like the potential ability to one-shot kill the Nazgul of Minas Morgul (Each Spearman and Spear is a separate source of damage) just by defending it.

Warden of Arnor 4444
I think, if I played correctly, I managed to kill the Nazgul in Morgul Vale using Beregond w/ Spear of the Citadel and 2 Gondorian Spearmen. The questing deck had threated out due to Watcher in the Wood treachery (raise threat by number of questing characters) and I still needed 3 damage on the Nazgul. I played Stand Together via Book of Eldacar and ruled each defending character applied their 1 damage as they sequentially exhausted, rather than as a lump of 3 damage. Hopefully that was legal! — Quetzal513 48 10/10/19
3

Well, I really underestimated this card. It's not really good in many occasions, however in heavy enemy quest, It can actually save your game and it's free to play. if you will be able to use it with all 3 copies of Gondorian Spearman and some heroes with Spear of the Citadel, then even better for you. For me was enough that I was able to block six orcs with two heroes and then put them down with my allies. And with Háma I can pretend I have three core sets. Artwork is also nice. Verdict: 4/5.