Response: After you play Wiglaf, play an Item attachment on him from your hand for no cost.

Action: Exhaust an attachment on Wiglaf to ready him. (Limit once per phase.) 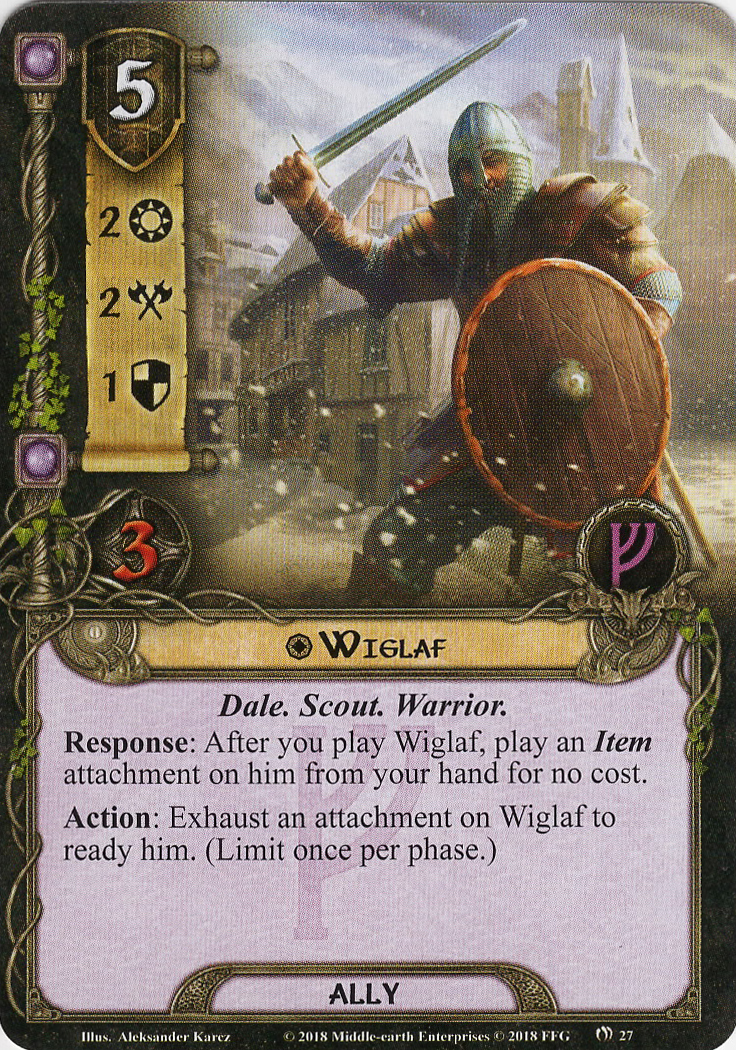 Same: both Warriors with 2/2/1 statline. Both overcosted at 5 & 6 resources respectively (1 resource buying you a single ). Their abilities technically both fall into the resource acceleration category.

Different: their abilities are pretty much on extreme ends of the spectrum on usefulness. Wiglaf has built in resource acceleration and readying; he'd only need card draw for the holy trinity of deck design (even though the included-in-pack Ancestral Armor is the clear match).

Brok... let me tell you the tale of his glory (based on a true story). In this alternate history of Middle Earth, at the Bridge of Khazad-dum, Dáin Ironfoot sacrifices (discards) himself in hopes of enabling his fellow's escape from their confrontation with The Balrog. Suddenly, from the shadows, the pipe smoking Foreman of the Pre-errata Zigil Miner Dwarfs (because I always thought they wanted to unionize and who better to oust from the top of their hierarchy, aka deck; well, I guess Beorn... but we're losing focus, back to the narrative!) emerges from a nearby passageway. Inspired by his striking visage, the weary Gandalf takes a reflective drag from his own Wizard Pipe and summons the Flame of Anor to discard a second hallucinatory image of their savior dwarf to lead the bedraggled fellowship to land an Ironfisted blow and vanquish the ancient evil (to the Victory Display, cha-ching)!

(Note: the adept player has 2 core sets and has carefully planned the use of both Brok Ironfists for this very purpose)

So ya, they're similar, but different. But overall Wiglaf is a really solid defender and if you were jumping into the game at this cycle and/or have a limited card pool he's right up there with about as good as it gets.

Quetzal513 73
hilarious — Truck 1232 2/8/21
Interestingly, like Brok, who as the Master of Lore blog pointed out is actually incredibly thematic, Wiglaf is a reference to one of Tolkien's works. Beowulf, to be precise: Wiglaf is one of Beowulf's companions when he goes to fight the dragon, and the only one to stand by him when he does so (after running away with the others briefly at the start). Shame that we didn't get a Hrunting card this cycle, though. Sigh. — AlasForCeleborn 510 2/8/21
@AlasForCeleborn Thanks for the great footnote — Quetzal513 73 2/9/21