Cannot have restricted attachments. Gwaihir does not ready during the refresh phase.

Response: After an Eagle ally enters or leaves play, ready Gwaihir. (Limit once per phase.) 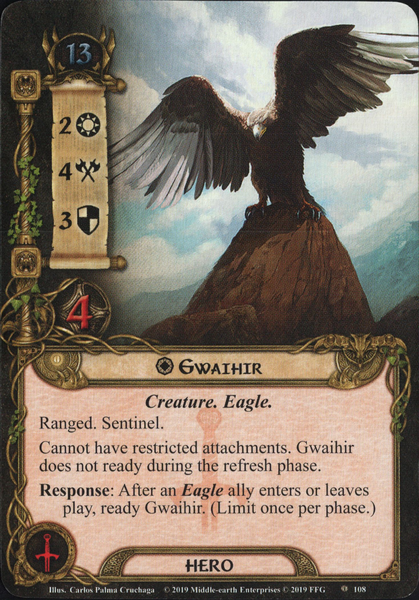 This card has two drawbacks that are obvious from first glance: 13 threat and the inability to ready in the refresh phase. However, Gwaihir the Windlord's many benefits easily outweigh the costs, as long as he is in the right deck. That caveat is important - Gwaihir is the kind of hero you build a deck around. In that right deck, he can do it all for you.

First, his stats are versatile. In addition to an excellent 4 attack and 3 defense, he also gives you a solid 2 willpower in tactics. What's more, since he boasts both the Ranged and Sentinel keywords, he can play just about any role you need him to play, anywhere around the table.

Second, his readying is easy to trigger, and contributes to a virtuous circle empowering Gwaihir. Many Eagle allies have costs to keep them in play which become more palatable when read: 'pay 1 resource or discard [ally] from play and ready Gwaihir.' On top of that, with cards like Flight of the Eagles you can pull allies out of play on demand. The virtuous circle is created by the greatest of all Eagle allies - Eagles of the Misty Mountains. Having the Eagles of the Misty Mountains in play allows you to discard and sacrifice your other Eagles more freely, knowing that you are getting a lasting boost from that Eagle. With Support of the Eagles on Gwaihir, you can then add the Eagles of the Misty Mountain's defense or attack to Gwaihir (without being restricted, reducing the effects of that limitation too). A mid to late game Gwaihir can swoop around the table, blocking just about any attack or killing most enemies - and thanks to his readying effect, frequently both in the same turn. This circle is the lifeblood of a Gwaihir deck, adding also a thematic win as Gwaihir leads his Eagles into battle with thunderous strength.

A natural companion for Gwaihir is Radagast (I've also had great success with Hirgon as a third hero since he gives you an extra window to drop an ally into play). Radagast can use his resources to pay for Eagle allies (as they are Creatures), and, most importantly, gives you access to Radagast's Staff. That staff lets you drop the cost of an Eagle ally by 2 each turn, making it even easier to ready Gwaihir each turn.

Gwaihir is a welcome addition to the Eagle archetype. His potent stats give you an edge in the early game, and the more Eagles you play, the more powerful he gets.