Flight of the Eagles

Action: Return an Eagle ally to your hand to shuffle a set-aside Eagle of the North into the encounter deck. Then, remove Flight of the Eagles from the game.

Behind them in long swift lines came all their vassals from the northern mountains, speeding on a gathering wind.
-The Return of the King
Carlos Palma Cruchaga 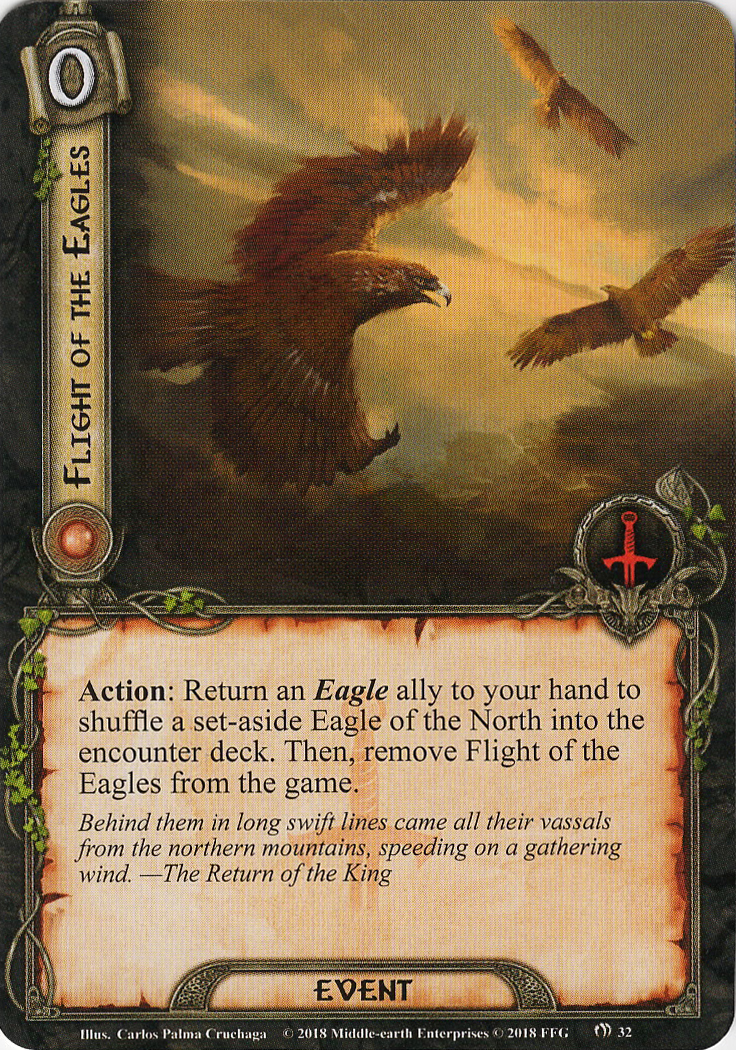 Of the events that shuffle beneficial cards into the encounter deck, this one is my favorite (the other options at the time of this writing being Ranger Summons, Flight to the Sea, and Tom Bombadillo!). There are several reasons for this:

The only bad thing about this card is that it's the final nail in the coffin for Meneldor's Flight. The only possible reason to include the latter in your deck over this one would be if you want to use Háma or Book of Eldacar to replay it, but that's a real stretch. I suppose if you're using the new Gwaihir hero then maybe you'd want 3 x of both cards? But otherwise, Meneldor's Flight is pretty much a coaster. Which is a shame, since printing cards that are strictly better than previous ones limits deckbuilding choices.

For me, this card is great. I really enjoy the idea of adding your own player cards to the encounter deck so as soon as I saw this card, I knew I had to put it in my eagle deck.

To play it you have to bring a eagle ally from play back into your hand. This could be quite expensive in most situations but could help for some of the eagles. If you use it on Descendant of Thorondor or Meneldor or even Gwaihir, then you can get more uses out of their abilities. So, if you have loads of reasources then this could be worth it, but you would probably want to use it on some of the more cheaper eagles like Vassal of the Windlord and Winged Guardian.

One way to "cheat" the cost is to Sneak Attack or Gwaihir an eagle ally in and then use this card on it.

The Eagle of the North ally itself is actually quite good. With the 2 and 3, it gives you some choices on what you want to do with it. You can quest or you can use him for a bit of attack. You'll probable want to quest with him cuz eagles have very low . You can also give him to another player who is in trouble in combat to help them out.

This card is a card that you could think is worth it or.... not so much. For me, it's worth it because I like playing with gimmicks like this as I find them to be quite fun to use, but I'm sure there are better cards to include in you deck.