Action: Discard the top 3 cards from your deck to ready Soldier of Erebor. (Limit once per round.)

The Ghost of Framsburg #85. Leadership. 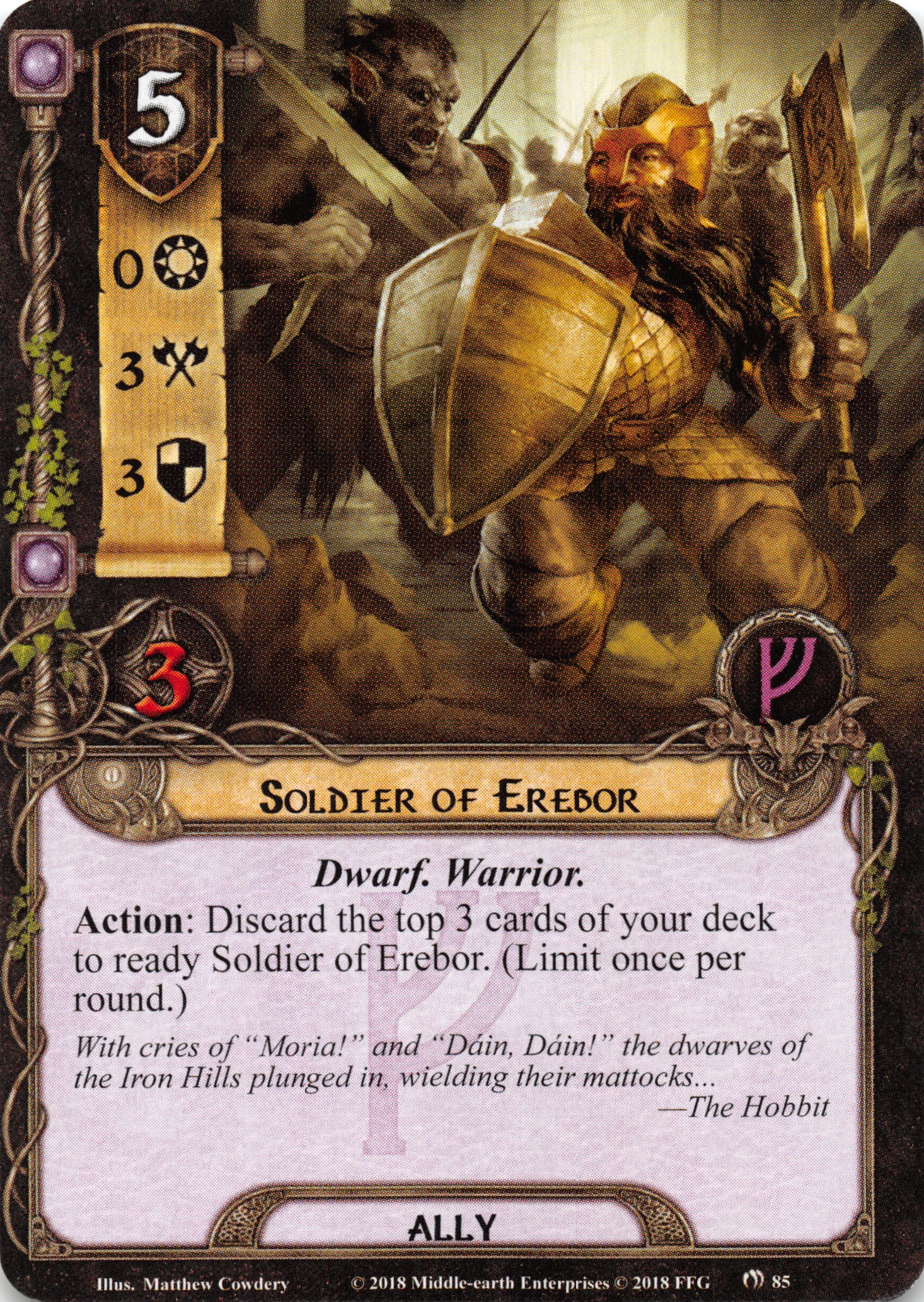 It's hard to believe that the Soldier of Erebor hasn't gotten more love here. In my opinion, it's possibly the strongest and most versatile combat ally in the game.

Leadership has few truly strong, all-around combat allies, which makes the Soldier of Erebor a standout with its 3 , 3 , and 3 . Even without its ability or Dwarf trait, which we'll come to in a minute, this ally is amazing. Consider that the only other Leadership ally with 3 base is Anborn, who is unique and has an ability that generally precludes using that stat. On the defensive side things are slightly better with two non-unique competitors: the (also excellent) Warden of Helm's Deep (who adds Sentinel but only has 2 ) and the (less excellent due to its play restriction) Knight of the White Tower.

But bear in mind that the Soldier of Erebor can do BOTH attack and defense... in the same round! And here's where we come to the clincher -- that amazing self-readying ability that is virtually free. Just sack three cards from your deck into your discard pile and you get to defend with the soldier twice, or defend and then attack back, or attack twice! That is absolutely a game changer, and a steal at that activation cost.

And then consider that this ally is also a Dwarf and so can benefit from powerful cards like Dáin Ironfoot, Hardy Leadership, various Dwarf attachments (such as Armor of Erebor or Dwarrowdelf Axe) not to mention options like Raiment of War or Ancestral Armor. On top of that, the ability activation cost can actually be helpful by fueling discard pile shenanigans with Hidden Cache, Ered Luin Miner, and all sorts of options if you combine with Spirit (Stand and Fight, Reforged) or Noldor (Elven-light, Glorfindel) options. The Soldier of Erebor just keeps getting better and better as we go.

But what about the cost, you say? Well, at first glance, 5 resources might seem high. There are few allies in the game that cost more (Brok? Brok?). But remember, this is Leadership , literally the most resource-rich sphere. Plus Leadership has native access to three of the best cheat-an-ally-into-play cards in the game: Timely Aid, A Very Good Tale, and Sneak Attack (also the newer Horns! Horns! Horns!). And lastly, the kicker -- once your poor Soldier finally retires from the battlefield and winds up in the discard pile, the end has not yet come. Just bring him back with To me! O my kinsfolk! for another two actions and then put him back in your deck. So yes, the Soldier of Erebor is, in my opinion, one of the single strongest combat allies in the game, up there with Giant Bear, Jubayr, Treebeard, and even Beorn himself. As a non-unique with no strings attached, the Soldier can find its way into all sorts of decks -- Secrecy, Steward, Vilya, Ally Swarm, etc. -- as a one-dwarf combat solution. That power plus versatility earns the Soldier of Erebor its place at the very top of the ally list.

I initially overlooked the usefulness of this card, because of the cost, but it's better than I thought. Dwarf synergy. It shares a trait with Prince Imrahil. It's got A Very Good Tale and Sneak Attack in sphere. Sneak him in for two attacks or defenses. You can get this guy in for cheap, with strong stats and built in readying which is incredibly useful. It's also leadership where things are generally expensive, but resources are plentiful. Leadership is not full of powerful combat allies.