Defender of Cair Andros gets +X [Defense], where X is the tens digit of your threat. (Limit +4 [Defense].)

Valour Response: After Defender of Cair Andros is declared as a defender, deal 1 damage to the attacking enemy. 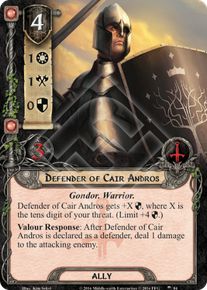 Defender of Cair Andros is a very powerful card. That is pretty clear to see. But is it worth it for 4 resources?

Lets first look at his stats.

One on a character is always welcome, though the cases when he will be questing, since he is a defender, are admitedly few. This does save him from effects like Power in their Terror. hallofbeorn.com

One attack is ok, but since he does have the Gondor trait that can be boosted by effects like Boromir if you need it.

Where the Defender really shines is... defending. Shocker. In most decks, (i.e. non secrecy) he is immediately able to defend for at least 2. His three hitpoints also make him much more difficult to kill than, say, Defender of Rammas. His Valour response is icing on the cake, allowing direct damage, similar to Spear of the Citadel or Gondorian Spearman. This also helps for extra damage opportunities on enemies like Nazgul of Minas Morgul or the stage 3 effects on Shelob.

Finally, Defender of Cair Andros is an excellent pair with Raiment of War. He also works very well with Hirgon or Prince Imrahil

All in all, Defender of Cair Andros is very much worth it and can be splashed into many, even non-Gondor decks.

bobbymcbobface 594
honestly, he's one of my favorite tactics allies for defending. once you get past 40, you have an ally with 4/3 defending stats with the ability of gondorian spearman. Absolutely shines in my Hirgon/Valor combat deck. — BlackArrow 187 9/1/22