Action: Put Morwen Steelsheen into play from your hand. Then, discard a Rohan or Gondor ally you control.

Response: After a Rohan or Gondor ally leaves play, exhaust Morwen Steelsheen to either heal 2 damage from a character or reduce your threat by 1. 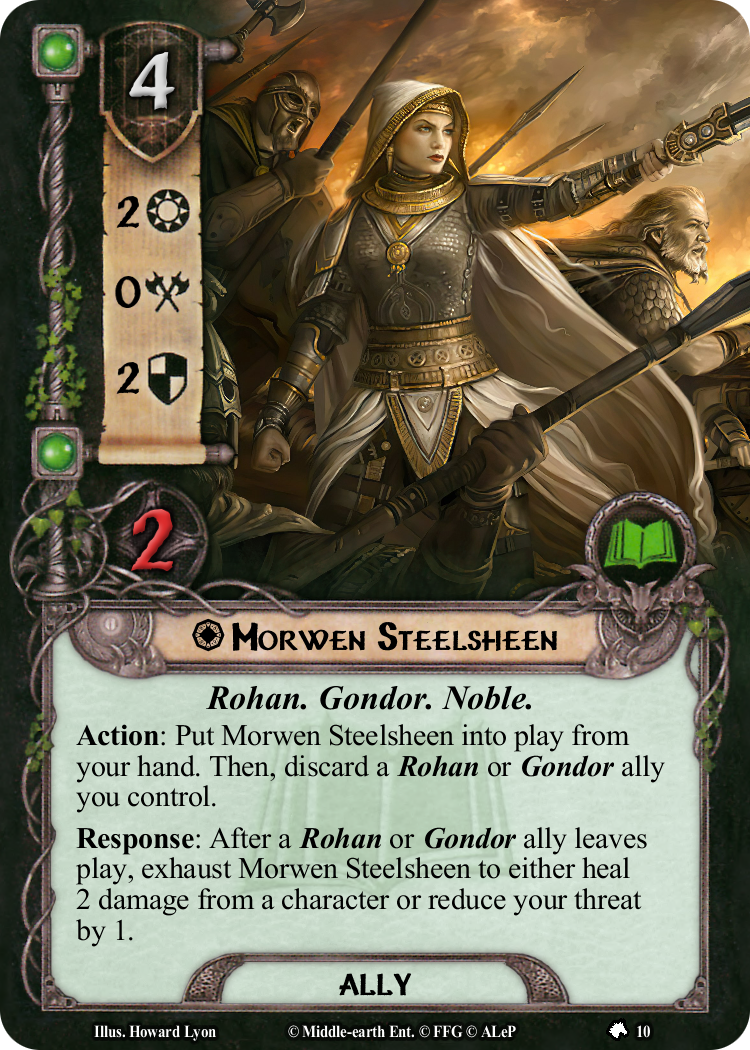 Morwen Steelsheen looks almost too good to me; the "cost" to trigger her action honestly seems more like a benefit, like The Elvenking's "cost" of returning a Silvan to hand, while repeatable threat reduction always causes me to raise my brow and take note.

First off, ignore her 4 cost, unless you're using A Very Good Tale; you are never going to play her regularly. Between her Action, her husband, and all the other chicanery available, you are more likely to include Keeping Count as a 1-of than to pay 4 for Morwen.

Once you get her into play, she's a solid quester at 2 who can maybe take a weak attack with 2 and 2 . You can buff her to 3 with Visionary Leadership or 4 with Astonishing Speed, or get Sword of Morthond on her if you're going Outlands.

However, all of this is discounting her text box, aside from Traits, and this is where Morwen really shows her quality. Her action doesn't just allow you to get a fairly strong ally into play for pseudo-free, it allows you to discard an ally from play, enabling Rohan's bag of tricks like Éothain, Éomer, and Thengel. This free "discard an ally from play" honestly seems so good that I think the best target to pay Morwen's Action's "cost" is herself, bouncing herself out of play so that you can trigger her and all your "after an ally is discarded from play" tech again once you draw a second copy (or recur her with Gamling or Gúthwinë). Using Morwen's ability to discard herself basically turns her into a 0 cost event that says "Action: Trigger each ability that triggers when an ally is discarded from or leaves play." If you have Thengel in play, this basically allows you to turn Morwen into an exhausted ally from the top 5 cards of your deck, a pretty good deal. And, since it's a raw Action, there aren't any phase restrictions; so long as you have her in hand, Morwen is ready to go, unlike The Muster of Rohan which has to wait for the planning phase.

This alone is good, but Morwen's response adds some more gravy, as well as an interesting choice; you can, once you set up your recursion engine, keep discarding her with her ability in order to trigger your Rohan tech, or you can keep her in play to make use of her response. After a Rohan or Gondor ally leaves play, you can exhaust Morwen to heal 2 (typically not that good of an idea due to the existence of a certain Gondor ally and the fact that discarding an ally and bouncing them back to hand effectively heals them) or reduce your threat by 1. Even aside from the fact that this provides threat reduction to , the sphere previously hardest pressed for threat reduction, this is fantastic; Galadriel has shown the power of repeatable threat reduction, and unlike her Morwen isn't limited to once per phase; if you get readying on her and get multiple allies to leave play, you can reduce your threat multiple times, repeatedly. If you make her a hero and get two Unexpected Courages on her, Gúthwinë and Gamling in play, and have Prince Imrahil as one of your heroes, you could conceivably (assuming you have the resources) use Elrond's Counsel every turn for the rest of the game.

Morwen Steelsheen is a powerful addition to the Rohan archetype, acting both as an enabler through her Action and a reactor through her response. Both are strong, and both are equally valid ways to play her; you can use her as a berserker, blinking in and out of play to trigger all your other Rohan goodies, or you can make her a battlefield commander and control your threat to an absurd degree. You could even conceivably change strategies mid-game, if need be, discarding her from play if she gets a nasty Condition attachment, the Dunland Trap's reset approaches, or some other disaster strikes, or you could have her charge into the fray and hold her ground if your threat starts to skyrocket. Whichever road you take her down, rest assured that Morwen Steelsheen has your back.

AlasForCeleborn 525
she has a big flaw. she cannot used in a deck with last alliance-contract that have gondor and rohan, because she has both printed traits &quot;each ally in your deck must have either the printed A or B trait, but cannot have both.&quot; was that intended? — doomguard 1502 4/11/21
She was born and raised in Gondor before marrying and moving to Rohan. How is it a flaw that she has both traits? That'd be like saying it's a flaw she doesn't have Hobbit since she can't use fast hitch. — Ipswatch 302 4/11/21
While she can't be used in a Rohan + Gondor Last Alliance, she can be used in both Rohan + B and Gondor + B Last Alliances. So she will likely appear in far more Last Alliance decks as a result of her Rohan and Gondor traits than if she only had one of them. — Seastan 37152 4/11/21
o.k. is intended, thx. but i find it weired that the best rohan-ally (o.k. perhaps beside eomund) could not be part of the last alliance of rohan and gondor. suggestion would be that you can choose what printed (either rohan or gondor) she has so she can participate and would not make her less worth for other allances — doomguard 1502 4/11/21
@doomguard If her card text allowed you to choose her traits, it would still prevent her from being in the Alliance, and her card text would not be active while assembling the deck. — Seastan 37152 4/12/21
if you can choose either the printed rohan, or the printed gondor she can do everything she does now and be part of the alliance (because she choses only one and have not both printed) — doomguard 1502 4/12/21