published: Jun 18, 2018 12 9 1 1.0
The gameplay simulator is an experimental feature and is currently only available for those that support RingsDB development on Patreon.
Edit Delete Copy Log a Quest

Chris here, celebrating the release of a new deluxe expansion with a new Starter Deck! Wilds of Rhovanion just released last week, and this is a deck you can build with just a single core set and Wilds of Rhovanion.

As you might expect, we're going all out on the new Dale allies and their signature attachments. We've got both of the Dale heroes in the box, Bard son of Brand and Brand son of Bain, King of Dale, and some classic core set cards to help back them up.

This is a fairly straightforward ally swarm deck right now, with some new tricks from the Dale playbook to help get more out of those allies.

The main pieces to keep the deck running smoothly are Steward of Gondor and King of Dale, both of which should go on Bard son of Brand. His resources can already be used to pay for nearly all of the attachments in the deck, and with King of Dale, he can pay for Dale allies from any sphere. And don't forget, Brand son of Bain gets you a card draw when you play the first of those attachments on Bard.

Other attachments are significantly more flexible. Bow of Yew is fantastic on a Warrior of Dale, it's true. But Brand son of Bain also comes with three attack, so he is a great choice for that one. And if you equip a North Realm Lookout with the Bow, they can effectively quest for 3 and attack for 2. Which is great for such a cheap ally.

Though I will warn you, Hauberk of Mail can go on both of the Dale heroes, but you probably want to save it for one of the allies. Redwater Sentry with a Hauberk has 4 defense and 4 hp, which is significantly more survivable either of the heroes.

Backing up the Dale pieces of the deck, we have some location control (and combat potential) in the form of Northern Tracker and Lórien Guide. They are a pretty hefty investment of resources, but the deck aims to get most of the resources on Bard anyway, so it shouldn't be a huge stretch to get them into play.

And we have the classic core set leadership draw package of Sneak Attack, Gandalf, and Valiant Sacrifice.

If you're looking for cards to expand this deck with, here are some suggestions based on how the deck was performing for me.

Such a pain recording a video this week. I was trying to improve the audio after moving my microphone, and it seemed like it was doing well in test recordings.

And then real recordings demonstrated that the new mic settings were bad. Like clipping out huge chunks of me talking bad.

So I had to get everything back to the way it was, more or less, and try to clean up some of the audio stuff in editing. Which did go okay, it's just time consuming, and maybe not quite as great as I'd like yet.

It does also mean you all missed Beregond getting completely one-shot by an errant shadow effect with another Dale-centric build. I'll have to give that build another shot, though. It was quite fun.

I also mentioned this in the video, but I'm getting a second camera and tripod, so I can shoot some playthroughs with real cards. No promises yet on how long it will take for me to get this up and running, but I'm working on it. Hopefully it'll be nice and easy, but I'm probably not thinking of something important. 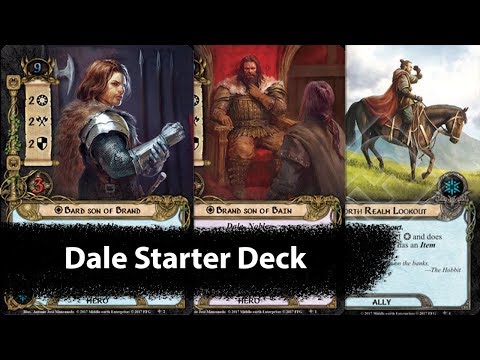