Rod of the Steward

Attach to a Gondor hero.

"The last Steward of Gondor begs leave to surrender his office." And he held out a white rod.
The Return of the King
Drazenka Kimpel

Flight of the Stormcaller #2. Leadership. 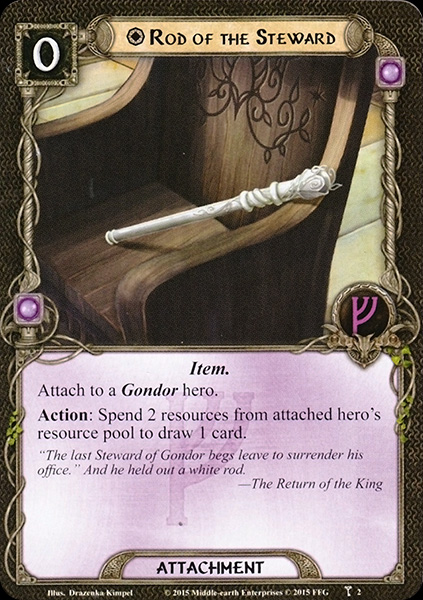 First, simply playing it on a Gondor hero. This is both the simplest and worst of the 3 ways to play Rod of the Steward, as it means that, barring resource acceleration or movement effects, you are only going to be drawing a card every 2 turns, and that's assuming you don't need to use the attached hero's resources for anything else in the meantime. If you can spend those 2 resources every 2 turns consistently because you're only drawing things you can't play, then I'd say either you could use some other card draw (like the more cost-effective Campfire Tales or We Are Not Idle) or your deck might need some tweaking.

Second, playing it on whoever has Steward of Gondor attached. As Steward gives the Gondor trait, any hero who has it attached is a valid target for the associated Rod, and the resources generated by Steward are just enough to pay for Rod's card draw. This is slightly more efficient than the previous method, as you can draw the card every turn without using any of your standardly-generated resources, but if Steward of Gondor is influencing your cost curve, then you might not be able to pay for whatever it is that you draw. Odds of that are lower than they were for the previous example, but the risk is still there.

Third, playing it on the Steward of Gondor who is also the target of as much resource generation and manipulation as possible. This is basically the previous method, just dialed up. But we can scale it up further, with method number four:

In Service of the Steward + Glóin.

Giving Glóin the Gondor trait completely breaks Rod of the Steward; suddenly, you can turn Glóin's infinite resource shenanigans into infinite card draw shenanigans, too. The best part is this is a card draw engine, so even if you only draw In Service of the Steward and Rod of the Steward in your starting hand, provided you can either take an attack with Glóin or absorb some direct damage, you can begin assembling the rest of the combo with astonishing speed. With these two cards and Song of Wisdom or Narvi's Belt, Glóin can do almost anything in the game; Longbeard Map-Maker turns resources into , Blood and Fire turn them into and , Warden of Healing turns them into , and now Rod of the Steward turns them into cards in your hand. All that's left is threat reduction, encounter control, dealing direct damage, placing progress, and readying, and thanks to Tome of Atanatar, Sneak Attack, and Bulwark of the West, at least the first and third aren't problems once you get the indefinite draw/resource engine going.

Overall, Rod of the Steward is an okay card. It's not stellar, and it's an easy cut, but if you include it and provide it with the proper support, it can do some work. And if you manage to get it on Glóin, wow, will it do some work.

In some Leadership decks which are often flush with resources but have problems with card draw this card can be quite the easy fixer, even though it has quite the steep cost. At least is free to drop and the Trait restriction is not so difficult to fulfill, especially since this card best friend Steward of Gondor conveniently gives the Gondor trait.