Action: Reduce your threat by 3 to give control of Wandering Took to another player. Raise that player's threat by 3. (Limit once per round.)

...but certainly there was still something not entirely hobbit-like about them, and once in a while members of the Took-clan would go and have adventures. The Hobbit
Tony Foti 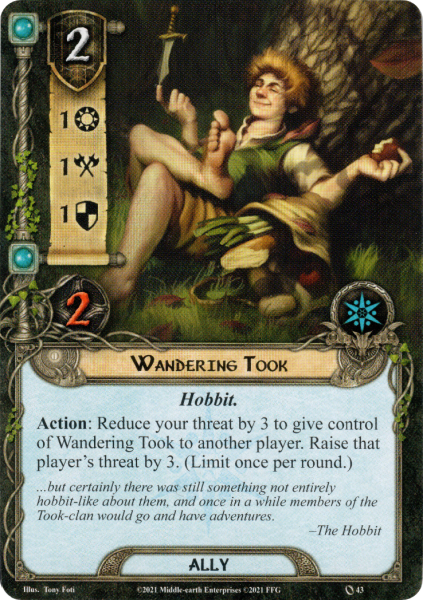 So most 1st-cycle allies kind of suck. It was early in the game's lifecycle and the developers were still getting a feel for the game, and they overestimated what allies were worth. As a result, almost everything is overcosted a little bit. If released today, Brok Ironfist might cost four, the Daughter of the Nimrodel would only be 2, the Guard of the Citadel would have a printed ability, etc.

But in the middle of all of that overpricing, there are a few allies from the early pool that stand out as really solid bargains. Henamarth Riversong is a steal at one resource, the Veteran Axehand gives you 2 attack and the dwarf trait for just two resources, the Northern Tracker's ability is easily powerful enough to justify his 4-resource cost, etc. I would suggest that the humble, often-overlooked Wandering Took falls firmly into this latter group, too.

To start with, 2 cost for 1 willpower, 1 attack, 1 defense, and 2 hitpoints is not a bad deal. In today's card pool, 2 cost can get you a non-unique with two willpower (Ethir Swordsman, West Road Traveller, Galadriel's Handmaiden), but it will only have one hit point, leaving it vulnerable to direct damage treacheries. The Took isn't quite as good of a quester, but he's a little bit sturdier. And unlike most of those 2-for-2 allies, (the Swordsman being the big exception), the Wandering Took also has one point of attack and one point of defense, making him a bit more versatile.

Like his decent, (but not exceptional), stats, the Took's ability doesn't really jump off the page, but it's far better than it might first look. It's probably most famous at the moment for its broken synergy with Song of Eärendil, (which can combine to enable any deck to activate secrecy discounts and valour triggers in the same phase), but beyond game-breaking shenanigans, it's just really, really good.

It looks at first like quick and cheap threat reduction-- you get to lower yours by three, and while your partner has to raise his by three to match, he at least gets an ally out of the bargain. But more than that, the secret to its power lies in the Took's name. He is a "Wandering" Took, and he really can wander anywhere at any time, even while exhausted.

You're probably familiar with the concept of resource smoothing, the idea that beyond increasing the total number of resources you have, just making sure that the resources are in the right place at the right time can be very valuable. Well, the Wandering Took serves as "threat smoothing". With three of these on the table at once, nine threat can be passed around at will. One of the tricky parts of multiplayer is often making sure that the right enemies wind up engaged with the right player at the right time. The Wandering Took makes this a breeze, easily letting players shift their threat to a cutoff just above (or just below) a particular enemy's engagement cost, then return the Took to their original owner afterward to restore the status quo.

And the Took doesn't just serve as "threat smoothing". If you hold him back during questing, he enters the combat phase as a sort of "attack smoothing". The most important hitpoint is always the last one; an enemy with 2 hitpoints isn't much worse than one with 1 hitpoint, but an enemy with 1 hitpoint is infinitely worse than one with zero hitpoints.

How often have you found yourself one point of attack shy of killing a critical monster? In a 4-player game, it's going to be a very common situation for one player or another. After you shuffle threat around during the engagement phase to make sure you're all pulling the right enemies, you can shuffle the Tooks around again to give each player that critical extra point of attack to finish off a foe. (Or, with multiple Tooks, that extra 2 or 3 points of attack.)

The Took can even sacrifice himself for the greater good as the ideal chump. He's always exactly where he needs to be exactly when he needs to be there. Some of the nastiest effects in the game are those that create unanticipated attacks on unprepared players. But with a Wandering Took at the ready, no player is ever unprepared.

A great way to conceptualize his power is to ignore the threat aspect for a moment and imagine he has Ranged and Sentinel printed, instead. Is a 2 resources a fair cost for a 1/1/1/2 character with Ranged and Sentinel? It's a bargain! Really, the most natural comparison would be with another wanderer-- the Dúnedain Wanderer, who provides 1/2/2/2 and Ranged/Sentinel for 2 resources... provided you're in secrecy. Otherwise he costs five. The Took trades one point of attack and defense for the permanent price reduction and that neat threat management.

Perhaps another natural comparison would be with Haldir of Lórien. Haldir, for double the cost, provides double the willpower, double the attack, double the defense, and double the hitpoints. (Yes, 3 is double 2. HP represents how much damage you can take before dying; the Wandering Took can take one point, Haldir can take two.) But Haldir is unique and the Took is not, and Haldir lacks the Took's threat-fixing aspect!

And I haven't even gotten into any jank yet. Partner deck has A Very Good Tale in hand but not enough characters in play? Wandering Took! Location requires exhausting a character to travel and the first player doesn't have any left? Wandering Took! The Took is a viable target for Hobbit Pipe (mobile card draw!), Ring Mail, Boots from Erebor, Bill the Pony, and Halfling Determination (super-defender!), and even Fast Hitch.

Indeed, at the risk of being overly bold, I would say that the Wandering Took is the single most versatile ally in the entire game. Not bad for a 2-cost 1st-cycle Hobbit who doesn't get much play.

Some Sort 3162
Simply brilliant. It was a card that went straight to the folder. — Eduncinata 8 4/1/17
I completely agree. — Wandalf the Gizzard 1964 6/12/17
&quot;A great way to conceptualize his power is to ignore the threat aspect for a moment and imagine he has Ranged and Sentinel printed,&quot; - this really sold me on the card. — Blackhaven 1 9/26/18
2

Wondering took is my favourite chump, which I prefer to have in deck more then Guard of the Citadel for example. First of all he got 2 hitpoints and , he can synergies with Strength of Will and he is one of the few hobbits, which can actually have some use from Fast Hitch in Mirkwood cycle. I don't even talk about his ability since I play solo. But all of this makes him much more interesting and cheap ally, then most of the others. Nice positive artwork. Verdict: 5/5.