published: Sep 12, 2019 66 44 20 1.0
The gameplay simulator is an experimental feature and is currently only available for those that support RingsDB development on Patreon.
Edit Delete Copy Log a Quest

Think Leadership Éomer is underpowered? Not for long. This deck just beat Battle of the Five Armies, one of the hardest solo quests in the game, in nightmare mode, on the first try, and it wasn't even close.

This is of course thanks to the new contract, spoiled today, which I've impatiently proxied and played with already: 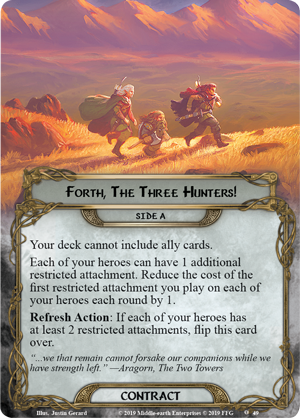 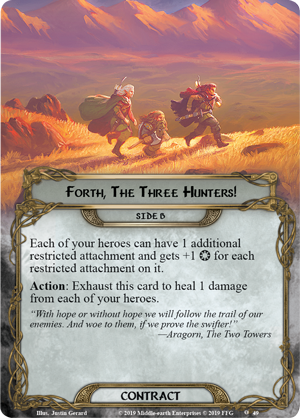 The goal here is to fulfill the contract on turn 1, which means getting out 6 restricted attachments. Éowyn starts with The One Ring, so only 5 to go. I like to mulligan for Raiment of War, since it counts for two. I'll also take a hand with Open the Armory so I can grab it.

Now only 3 to go, and you've only spent 1 tactics resource (and maybe another resource to play Armory). You can play a 1-cost restricted attachment on Éomer for free, ideally a Spear of the Mark or Dagger of Westernesse, and another on Éowyn, ideally a Windfola or a Steed of the Mark.

The last restricted attachment is for Eomer, and you're out of tactics resources, so it's got to be Bow of Yew, Round Shield, or pay 1 spirit resource for a restricted mount. Don't worry, you can always replace rectricted attachments once you reach the cap by playing another one.

Now, just survive until the refresh phase so you can flip the contract.

I am able to do this on turn 1 with high frequency. If not turn 1, then definitely turn 2. In my victory against Battle of the Five Armies it took 2 rounds, but that's only because hero Bilbo required some attachments too. Luckily, the hero lineup has a decent quester, attacker, and defender, so surviving until the contract is online is not very difficult. Éowyn can help you clear any pesky enemies that may show up on turn 1 or 2 to buy you the time you need. Note that with The Ring of Power, she can actually attack twice for 11+ , (or three times if she starts out ready). Insanity.

Once you're on side B, you can start thinking about what attachments you really want to see where. Having Snowmane on Fastred would let you commit his now 4 to the quest and be ready to defend. Getting a third weapon/Firefoot on Éomer will let you quest with his 4 and attack for up to 9 into the staging area, obliterating whatever enemy Fastred knocked up there last turn.

You are pretty much invincible at this point. You've got plenty of willpower, a solid defender and attacker, endless threat reduction with Fastred, A Test of Will for cancellation, and amazing healing through the contract. With an Unexpected Courage on Fastred, you can even deal with a surge train of low threat enemies.

Step aside, Aragorn, Legolas, and Gimli.