published: Nov 30, 2019 25 8 9 2.0
The gameplay simulator is an experimental feature and is currently only available for those that support RingsDB development on Patreon.
Edit Delete Copy Log a Quest

After seeing the recently spoiled Grey Wanderer contract, I wanted to see just how far I could push it. 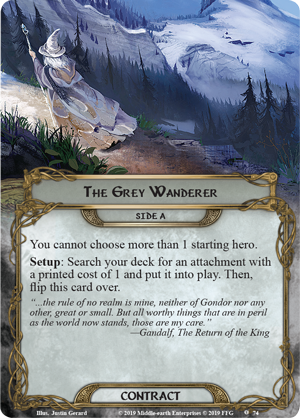 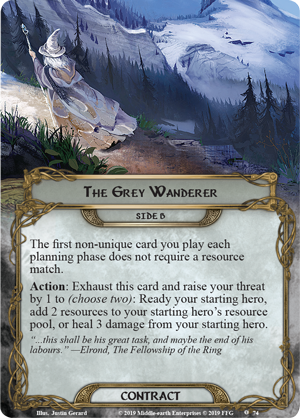 I think this contract is one of the most interesting and powerful contracts we've received thus far. But how powerful is it? Is it broken?

As an experiment, I wanted to see if this card could be used to make a deck focused around a hero that is widely considered to be one of the worst in the game, Pippin, and beat one of the hardest quests in the with it, Carn Dum. Because if it can, well, the sky's the limit.

Important note: This deck is very highly tuned to beat this specific quest. I do think it could also beat many others, but that has not been tested.

This deck features a low-threat, high willpower strategy that is pretty effective against Carn Dum. Thaurdir's Captain side gives all enemies +10 engagement cost, and there's no archery in the quest, so as long as you can keep Thaurdir from flipping you can simply leave enemies up in the staging area and build up your willpower to quest past them.

Once your Outlands army is developed, you can advance to stage 2. At this point Thaurdir flips. If you managed to get a good early game then your threat may still be low enough thanks to The Shirefolk to avoid engaging a few enemies, even with -10 engagement cost from Thaurdir's champion side. Regardless, this is where Pippin shines: simply raise your threat by 3 for each enemy that engages you to push it back to the staging area. Even if you have to push your threat way up into the 40s, it doesn't matter. You will only have to do this once, because on the turn you advance to stage 2, you will pile a ton of damage onto Thaurdir with your Outlands allies and the very next quest phase you will do an all-out quest for the win!

"So as long as you can keep Thaurdir from flipping" is easier said than done, right? Well, not so much. In my successful attempt, which was an arduous 16 rounds, not a single Sorcery card got revealed. This is thanks to a combination of The Master Ring and Firyal.

The Master Ring cancels the entire effects of a card as if it were never revealed. This means it avoids Thaurdir's forced effect. Starting with a copy of The Master Ring in hand makes avoiding the first Sorcery trivial. After that, you should have control of Firyal thanks to this deck's aggressive means of getting her into play with A Good Harvest/Timely Aid/A Very Good Tale (remember that The Grey Wanderer does not help you play off-sphere uniques). Once she's in play, you only have to worry about back-to-back Sorceries, and once you find another Master Ring you only need to worry about back-to-back-to-back Sorceries, which essentially means you don't need to worry at all.

I'll also use Firyal/Master Ring to ditch those annoying surging Orc Grunts with 8 engagement cost, which can really mess up your early game if you don't gave a defender yet (though Pippin can buy you a turn or two).

The other thing that can flip Thaurdir is the Daechanar's Will treachery. For this, you still have Firyal/Master Ring, but you also have A Test of Will.

The 1x Ancestral Armor is for late game. If early game didn't go well and you need to clear out some enemies from the staging area before flipping Thaurdir, you can do so with a Warrior of Lossarnach+Ancestral Armor for defense and your Outlands allies for offense. He can also be used to take one of Thaurdir's attacks post-flip.

Will of the West serves three purposes. One, it recycles card you've played like The Shirefolk for another use. Two, it brings back key allies may have had to discard due to A Very Good Tale or some treachery card. Three, it protects you from many of the devastating effects in this scenario like Dark Sorcery or Heavy Curse.

When The Grey Wanderer was first spoiled, players were quick to point out how amazing it works with Strider, to the point of asking why you would ever pick anything different. Well, here is one such case. In fact, any Grey Wanderer deck with a spirit or Noldor starting hero should consider the underplayed Steed of Imladris as their one-cost attachment.

The Grey Wanderer gives you the options of resources, readying, and healing. The only thing it's really missing is card draw. And in spirit, your options there are limited. Steed of Imladris gives you access to Elven-light, so you can convert some of the resources that you generate into cards. The two progress it gives you are comparable to the 2 willpower you'd get get from Strider, assuming you can keep traveling to locations, and outperforms Strider's willpower in instances of location lock or when you have more than 5 characters. The "quests without exhausting" is Strider's main selling point, but when you've already got the ability to ready with Grey Wanderer, how many spirit heroes actually benefit from three actions per round? Pippin here doesn't.

But most of all, it's perfect tech against the Battle of Carn Dum, which starts with an active location that makes the current quest gain battle. Without some way to clear that location, the low-threat-high-willpower strategy comes to a screeching halt.