The Favor of the Lady

"You are indeed high in the favor of the Lady!"
Unnamed Elf of Lórien,
The Fellowship of the Ring
Magali Villeneuve 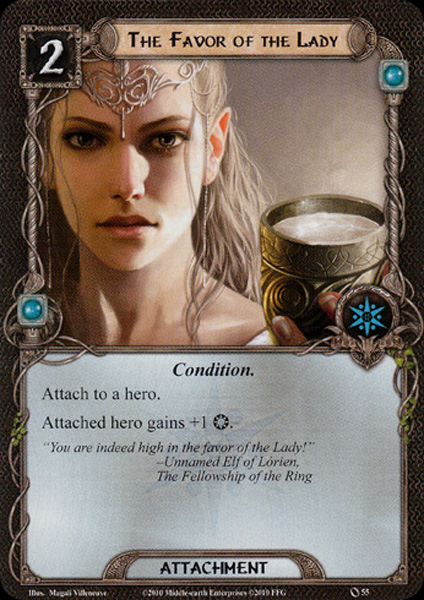 Favor of the lady is simply over-costed. 2 for 1 is just not enough. There are plenty of other options in spirit for willpower, including a slew of cost appropriate allies. Who cares if Magali V-whatever did the art.

Archetype of willpower addition which is over-costed to much for what it does. Already in core set the Celebrían's Stone made this card unnecessary for me, since I usually need to boost only one hero for questing and Celebrían's Stone is logical choice. And then Dúnedain Quest came and finished this one. It's nearly the same, but you can at least move it from hero to hero. I use favor basically only in special cases, where I don't run or when there is no other way how to boost a hero. However the artwork is beautiful. Verdict: 2/5.

I've already mentioned that this card is overcosted in my review of Celebrían's Stone. Even when there was just the core set and power creep hadn't really begun to set in, this card felt underwhelming.

Firstly, in comparison to the stone it provides 1 less for the same cost. Given that the stone belongs to the sphere that can generate an additional 2 resources per turn, either that card is way too cheap or FotL is too expensive. Not too long after that, we received Dúnedain Quest, which is the same cost as FotL but offers added depth by being able to be moved around, which is particularly useful in multiplayer. Out of these three boosters, I think DQ is the best designed as you don't mind paying for it when you have access to the sphere but it doesn't feel overpowered. Fast forward to today and we now have Silver Circlet, which all but renders FotL obsolete. Its one saving grace is that it is not restricted, whereas the circlet is but I feel you'd be much better off using the two spirit resources to purchase an ally with 1 such as Wandering Took as at least it gives you more versatility as an attacker or defender/chump blocker. Therefore, I can only see FotL featuring in decks where you are trying to maximise a hero's for a specific purpose and they don't have any more room for restricted attachments (e.g. a pure spirit deck using Éowyn with Herugrim and Snowmane). Beyond that, I can see this card being useful as a coaster.

I feel that this card could be improved by either a) lowering the cost of it to 1, or b) changing the card text to read 'attach to a character' instead of just a hero. Either of these amendments would improve the card greatly and increase the chances of it seeing the light of day again (if it ever has done).