Response: After a card effect adds any number of resources to the resource pool of a hero you control, Harbor Master gains +1 until the end of the round.

For the Elves of the High Kindred had not yet forsaken Middle-earth, and they dwelt still at that time at the Grey Havens...The Fellowship of the Ring
Kristina Gehrmann 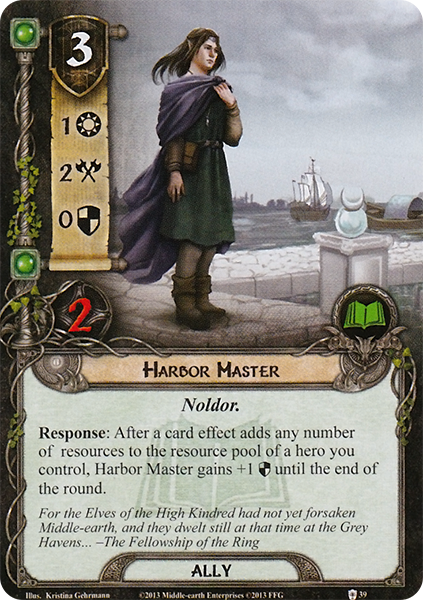 I've always found this to be one of those cards which inspires interesting ideas, but one tends to struggle to make those ideas actually work in practice. One of the problematic aspects is that if you want to build around his ability that means turning him into a defender, but his base is 0. So if that's a significant aspect of your strategy, to use him as a defender (probably with A Burning Brand), you're stuck not having that good available until you get a bunch of other effects up and running.

So if you want to build around the Harbour Master (Shh I know what the card says but I spell things the British way regardless), what works? Well firstly of course he's a Noldor, so any of the more recently released Noldor cards like Lords of the Eldar and To the Sea, to the Sea! will work with him. Reducing his cost could be handy, since 3 can be tough to swallow. But primarily you want to look at the ability and thus resource generation effects. Well there are a fair number to choose from, though not many in-sphere. A Hall of Beorn search for Resource Acceleration yields 27 results, though this does include 2 boons, which obviously aren't applicable outside of campaign mode.

Love of Tales if you have a fair number of Songs flying around the table could get you 3 every round in a mono- deck. Bifur works because of the way his ability is phrased - pay 1 to add 1 rather than phrasing it as "move". It's important to note that effects which simply move resources do not count as adding them and thus do not trigger the Harbour Master. Keys of Orthanc with consistent Doomed effects (Gríma being the most obvious source) will work. Gandalf's Staff has the option to add a resource, so if you have either permanent version of Gandalf you can use that. Handily it's on-demand so since the Staff is flexible you may hold it back and then have it available to get an emergency boost if you need it.

I'm never sure if Resourceful would count for this or not. Similarly the out-of-sphere Thorin Oakenshield or Amarthiúl. Obviously it does give you an extra resource, but I'm not sure if it counts as the card effect adding another resource to you or if it's simply altering the framework effect of the number of resources you collect each round, which obviously don't trigger the Harbour Master.

Venturing out of sphere, Théodred, Mablung and Arwen Undómiel (who fits very well if you are putting the Harbour Master into a Noldor deck) are your hero options and thus the most consistent ones, guaranteed to be on the table. Steward of Gondor is an obvious option, or Zigil Miner (probably paired with Imladris Stargazer for consistency). Beyond that, event-based resource acceleration will work but you obviously can't rely on them since they're one-shots - in particular Legacy of Númenor is a great one since it'll give you 3 extra from one event assuming you can take the Doomed, and Hidden Cache obviously fits well if you're using Zigil Miner. Miruvor also can work as a decent one-shot option, as can Envoy of Pelargir though for her you make the decision during planning as opposed to Miruvor being potentially any time.

Finally there are some options which work but make less sense - Horn of Gondor and Squire of the Citadel will give you resources, but only if you chump-block, which seems odd to be relying on if your strategy involves powering up a super-defender in the form of the Harbour Master. Sword of Númenor would work but aside from the unreliability of being able to trigger it it triggers on killing an enemy, which usually happens after defences, rendering the boost useless at that point. The Day's Rising again will only work if you have another strong defensive strategy besides the Harbour Master, at which point you may question why you're putting so much effort into them.

Finally, Glóin. Same issue again - mostly if he's taking damage that probably means the Harbour Master isn't defending. However if you have other access to direct damage, such as a lot of archery, treacheries, Naurlhug in Ruins of Belegost, etc, then that can work out well (and generate you a ton of resources to boot). And most significantly, if you put together the Treebeard/Glóin/Song of Mocking combo you can get ridiculous values on your Harbour Masters since the Treebeard damage is dealt one point at a time so each one generates a resource and thus triggers the Harbour Master separately. Get Gloin an Ent Draught, trigger Song of Mocking in the encounter phase and give all your Harbour Masters +5 during the encounter phase!

All this sounds great, but it's also, as I mentioned, complicated to put together. A lot of moving parts which have to arrive in a timely fashion before the combo will function fully as intended. I tried to put together something with this a few times and never got it to work consistently. On the other hand, there have been a fair few releases since those attempts which have made it potentially a lot easier to set up janky combos reliably, not to mention I've gotten better at deckbuilding, so maybe it's time to revisit the concept. We'll see! To you readers, obviously I've demonstrated some powerful setups which can make impressive use of the Harbour Master, but if I've inspired you to make use of them, don't be too surprised if it doesn't work quite how you expect, expecially not right away. Either way I hope you have fun with it though.

Warden of Arnor 5060
tried it once, but there are other faster and better solutions for defense. — Lecitadin 182 6/13/16
My understanding is that Resourceful most certainly does work with Harbor Master. It increases your total net resources by one (an &quot;add&quot;) and it is a card. When I've had success with Harbor Master, it's generally been Resourcefuls and/or resource-generating heroes. Bifur/Arwen/Theodred/Mablung (pick 3) is a very easy &quot;out of the box&quot; kit to get your harbors mastered. Or any secrecy deck with Bifur or Theodred. Really, my biggest complaint is that I think for the cost he should have 3 HP at least instead of 2, because even if you do get his defense boosted he can still be a tiny bit squishy thanks to direct damage effects. — Some Sort 3077 6/29/16
Of note: I had some crazy experiences with Harbour Master in this deck: http://ringsdb.com/decklist/view/1261/queens-of-the-eldar-1.0, thanks to super-fast drawing, Arwen, 3x Resourcefuls, a Steward of Gondor, and a several Lords of the Eldar. (I should note that at the time I was playing it in a fellowship where I forgot that you weren't allowed to play Resourcefuls across the table, which gave him a couple extra points of ill-gotten defense every round, too.) — Some Sort 3077 6/29/16