Action: Exhaust Aragorn to choose a location in the staging area. Until the end of the phase, that location gets -X , where X is Aragorn's . If this effect reduces the location's to 0, place 1 progress on it. (Limit once per round.) 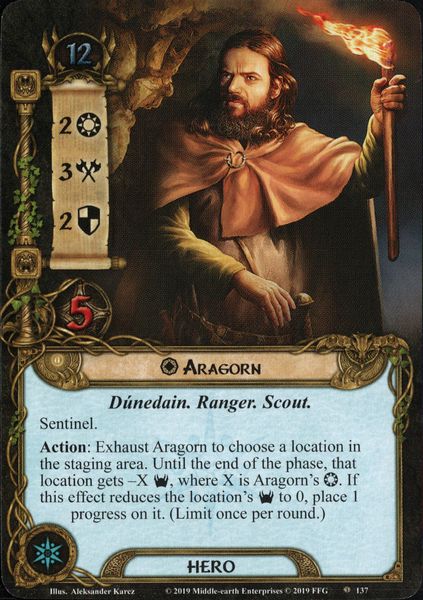 I'm not sure whether I like this new version of Aragorn. Do I like the ability? Yes - the natural ability to deal with location-lock is obviously a powerful one. The problem though is that in order to use his ability, you are going to have to forego questing with him, which is counter-productive when you are trying to deal with location lock in the first place, or find some readying effect so that he can do both. As he is in the spirit sphere that shouldn't be too hard to do but most of the time, you'd probably prefer to use his 3 attack or reserve him for defence, particularly as your starting threat is likely to be high as he contributes 12 just on his own. This version also having Sentinel is great to see again but it gives you another reason to not use his ability if other players are relying on him to defend for them.

Another benefit of his ability is that you can wait until after staging to clear any potential high threat, single quest point locations that are revealed from the encounter deck (yes I'm looking at you, Brown Lands), but the problem here is that there are only 10 different locations in the entire game with just 1 quest point (11 if you include the Mountain Roots in Solo) and his ability is limited to once per round. Furthermore, nearly half of those would not be impacted unless you have some way of boosting his as they have a higher than his unmodified . Again, this shouldn't be too hard to remedy given there's plenty of options in sphere, but until you do, he effectively is just contributing 4 to questing, something you could quite easily do with Aragorn with a Celebrían's Stone and still have him ready to do everything that this new version can do. I might add that with this powerful artifact attached, Aragorn gains a icon and so would give you access to a powerful ally that renders this ability almost useless, which has also existed since the core set. I am of course talking about our trusty Northern Tracker, which adds 1 progress to every location in the staging area every time it quests. Admittedly, it is one of the more costly allies at 4 resources, but within the sphere resources are easy to come by and there are other ways of getting it in to play for less cost (i.e. A Very Good Tale or Timely Aid) that don't require you to have found Celebrían's Stone to play allies off-sphere.

So why would you choose to use Aragorn over his counterpart or any of his other versions for that matter? Firstly, you might just be bored of playing cards from the core set, however, if that's the case, I doubt this version of Aragorn would excite you as it is essentially the same basic hero as the version from the core set and you are almost guaranteed to want to use Unexpected Courage with him. No, I think the main reason you might want to use Sparagorn is if you have a number of different types of location, some that punish you for travelling to them and some that punish you for clearing them. In these circumstances, you are more likely to want to clear individual locations out of the staging area as opposed to using your Northern Tracker to clear them all. I can also see him working in a secrecy 'Strider' deck as he would then be questing for 4 and would always have the option to use his ability to clear out locations, which he would be much more effective at. He would also have in-sphere access to a host of threat reduction to keep him in secrecy and below enemy engagement costs and a number of readying effects in Unexpected Courage, Miruvor, Defiant Challenge, Desperate Defense etc.

Overall, I'm not hugely excited about this version of the King of Gondor but I can see some situational uses for his ability and he does belong to the most powerful sphere IMO. I think he would be best used within a secrecy questing/support deck chipping in with a bit of defence using Sentinel, whilst another player takes on the majority of combat.

Aurion 784
IMO, in the third paragraph you hit the nail on the head; it's not that Spirit Aragorn's bad, per se, it's just that he's not Aragorn-level good. If he were someone like Spirit Argalad, I believe he would see a lot more use. — AlasForCeleborn 525 3/18/21
3

I think Aragorn is an underrated hero. I know he doesn't get a lot of use because he's not a very splashable hero (and because he's named Aragorn), but if you use him to the best of his abilities (and yes, you do have to build around him), then he can be really nice - he essentially allows you to quest twice (I know his isn't impressive as is, but if you're building around him it's going to be pretty high!). At his best, he'll be able to use his ability with around 5 to get rid of 5-ish from the staging area and put some progress on a location (which then will be promptly explored with Rhovanion Outrider and Northern Tracker). Then he can ready with Unexpected Courage and quest again for 5 . If he's got another Unexpected Courage, he can defend or attack after that. So he might not be as easily usable as the other three iterations of Aragorn, but I still think he's fun to play with.