Action: Choose a player. That player may choose 1 card from his hand and add it to another player's hand. At the end of the round, if the chosen card is in that player's hand or in play, shuffle it into its owner's deck.

"But we have heard rumours of your coming, for the messengers of Elrond passed by Lórien on the way home up the Dimrill Stair. Haldir, The Fellowship of the Ring
Arden Beckwith 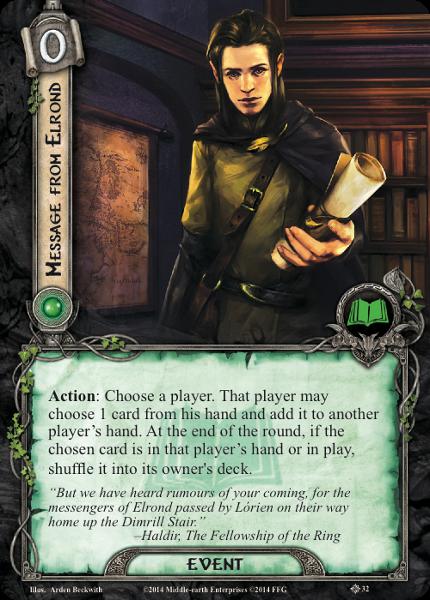 Message from Elrond is a tricky card. It's not particularly easy to come up with good uses for it, which is one reason why it is in my opinion rather under-rated. The other reason is that it's a purely co-operative card. While this game is co-operative, most people most of the time will not build their decks co-operatively. Rather they will build to make sure their deck can do the things it's supposed to do and hope any gaps can be covered by other decks' capabilities. Message from Elrond thus loses out because it's something which is unlikely to really work unless you build multiple decks in concert specifically to work well together.

So let's take a look at the effect. You can move a card from one player's hand to another's - a point which a lot of people will forget is that you don't have to be passing a card from your hand to someone else, it could be them to you, or them to someone else. This adds some additional flexibility. The problems are twofold however - firstly just because you can move a card from one player to another doesn't mean the receiving player can play that card; and secondly the card will be shuffled back into its owner's deck if it's still in hand or in play at the end of the round. The first isn't complicated to solve - you just need to have multiple decks in the game running at least one of the same spheres. The second is where it gets a bit more fiddly, because it means this isn't a solution for just not being able to afford your big ally or attachment as they wouldn't remain in play. It could work with Gandalf, Saruman, Galadriel or Elrond (or any other temporary allies in future), with Gandalf and Saruman being particularly good candidates since they're Neutral and can thus be played by any deck. Temporary attachments have consistently been cheap thus far so it might seem more of a waste. Mostly though, this card is good for passing events around.

Before I get into that main use I just want to mention a couple of the side-points. The other significant point is of course that it transfers the card, which can have a reason other than letting it be played. If a situation arises where you need to discard one more card to Éowyn to clear a location or quest stage, or someone urgently needs a card to discard to boost with Protector of Lórien, or with Elven Spear but the relevant player doesn't have any cards then you can pass one over. If someone is using Galdor of the Havens and the last card in their hand is something useful enough to not discard but not currently useful (e.g. Power of Orthanc with no harmful Conditions in play), then Message from Elrond could let them pass that card away, emptying their hand so they can draw six with Galdor. And when the card is shuffled back in at the end of the round, well they can hopefully draw it again by the time they actually need it. Or there might be odd cases where someone really wants a card shuffled back into their deck, like Hidden Cache, or an expensive card they want to bring in with Vilya. These aren't really reasons to put Message from Elrond in your deck, but they are odd useful things you can do with it once it's there for other reasons.

But as I said, the main use of Message from Elrond is to pass events around, and there are a few different categories which could come up:

Message from Elrond certainly takes a bit of thought to make it work really well, but the ceiling for what crazy stuff it can do is really high if you're willing to go the effort of constructing two or more decks specifically to work together around sharing events like this. It's not for everyone I suppose, it's really a card primarily for the more tricksy and shenanigansy players so if you prefer to keep things simple it's not unreasonable for you to give this one a miss, but if you are the kind of LotR player who enjoys indulging in shenanigans from time to time you should really give this card a try!

Warden of Arnor 4225
Nice ideas for the card! I would like to add that it could also be used to add onto a chain of The Evening Star, Skyward Volley, and so on. That's always seemed like a fun idea to me. — WingfootRanger 2261 11/27/16