published: Jan 10, 2022 7 3 11 1.0
The gameplay simulator is an experimental feature and is currently only available for those that support RingsDB development on Patreon.
Edit Delete Copy Log a Quest Play on DragnCards

TL; DR: Once Glóin gets Song of Travel, Song of Healing, and a Citadel Plate, he can take every attack undefended. This is because every time he takes damage from an undefended attack, you can use some of the resources he gained to immediately cycle Elven-light with Song of Healing until he is back at full health. Thanks to Elrond, every cycling of Elven-light heals 2 damage off of Gloin, so every 2 damage results in 1 net resource and 1 card draw. By engaging everything that comes out of the deck, you can use all that damage to quickly draw your whole deck and gain a large amount of resources. Not an unlimited amount though – you are still dependent upon damage from the encounter cards to build your board state – but luckily The Black Gate provides a lot of that.

After you've drawn your deck, you can then use Helm of Secrecy to swap Eowyn (who was helping you avoid threat raise from failed quests in early game) for Galadriel to keep your threat raise at 1 per round. Also set up Nori with Sword-thain, Steward of Gondor, and Gondorian Fire so that he can use Hour of Wrath to wipe the board of enemies each round and recycle Ever Onward, Hour of Wrath, and your treachery cancellation cards.

Ever Onward prevents you from raising your threat from failed quest phases (credit goes to Glamcrist/GreenWizard for this Black Gate tech). Gloin takes all the attacks, and Nori kills most of the enemies (credit goes to Glamcrist for the Nori/Hour of Wrath combination). Four of the worst treacheries have been removed from the deck thanks to Out of the Wild and Scout Ahead. Only 1 problematic treachery remains, and though you will be seeing it many times thanks to the cycling of the encounter deck, you can use The Door is Closed! to cancel its first 3 appearances, and in actions windows provided by attacks from the Mouth of Sauron, you can cycle them back to your hand with The White Council and Elven-light and cancel the next 3 appearances. You can even play Stand and Fight with Galadhrim Weaver to recycle one more The Door is Closed! for the rare 7th appearance.

Using this strategy I was able to get 60 tokens on The Black Gate in true solo. I was fully set up around round 8, and after that there was nothing the encounter deck could do.

Breaking the 60-token barrier in The Black Gate Opens presents a unique challenge. Even if you can somehow clear the board every turn, 60 card reveals means you start cycling through the encounter deck many times in one turn. And since the only cards in the discard will be the treacheries that you just revealed, it means revealing all the treacheries back-to-back multiple times in the same quest phase.

In my old fellowship that achieved over 90 tokens, I used a combo to get unlimited resources, then used those resources to recur Out of the Wild a bunch of times to remove all the cards from the encounter deck.

However, Out of the Wild has since received an errata, making that strategy impossible. Unlimited combos still exist though, and can be used to good effect against this quest, as seen in my previous deck here which can regularly get 40+ tokens.

But I have thought a lot more about the quest since then, thanks to a bit of rivalry from Glamcrist, where he has shown a deck capable of 25 tokens that does not rely on unlimited combos. (I keep saying "unlimited" rather than "infinite" because you don't ever actually generate infinite resources with these decks. You just have the capability to increase your resources without limit.)

The key all comes back to the treacheries. The biggest two elephants in the room are The Hour of Doom (3x) and Jaws of Steel (2x). 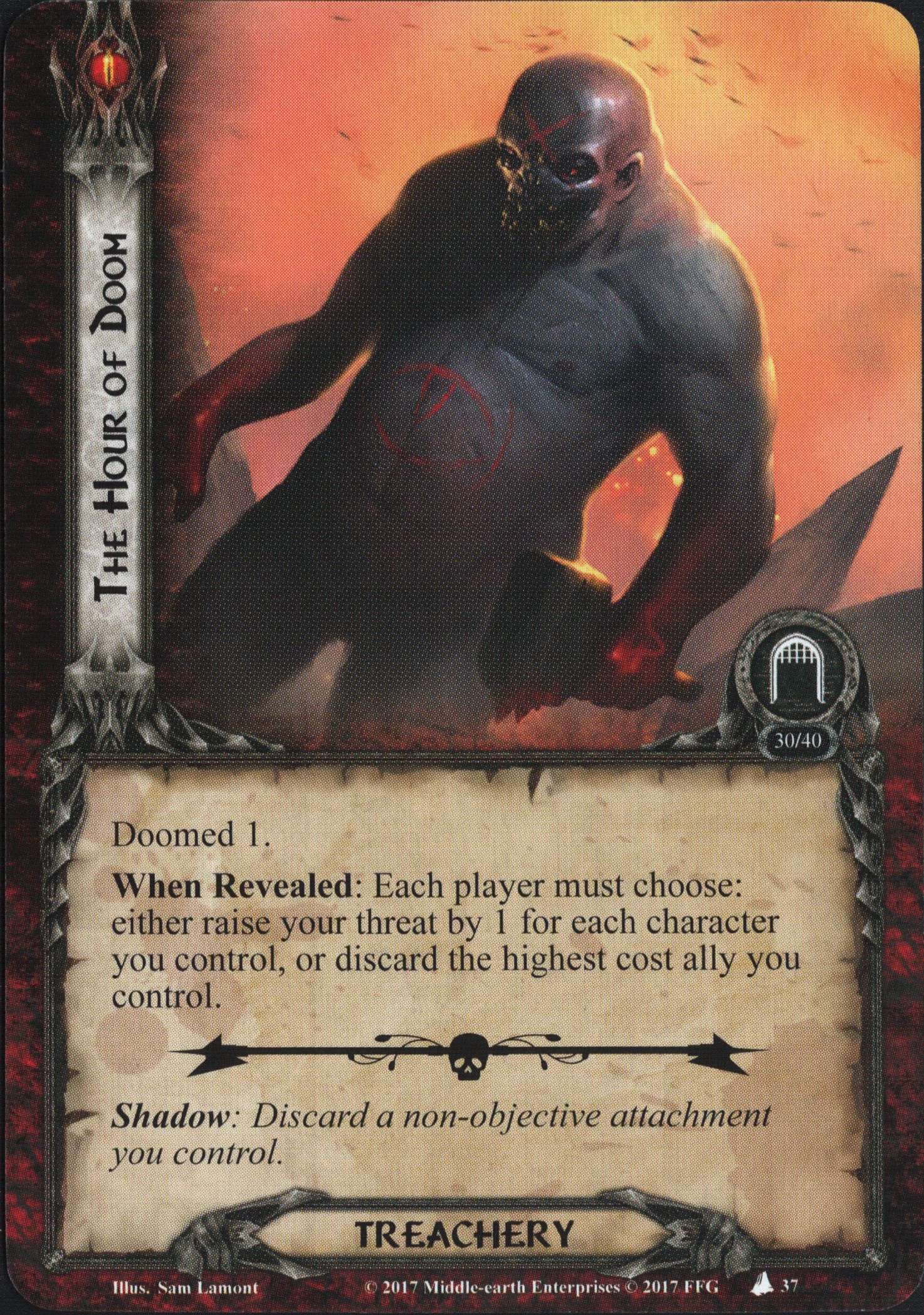 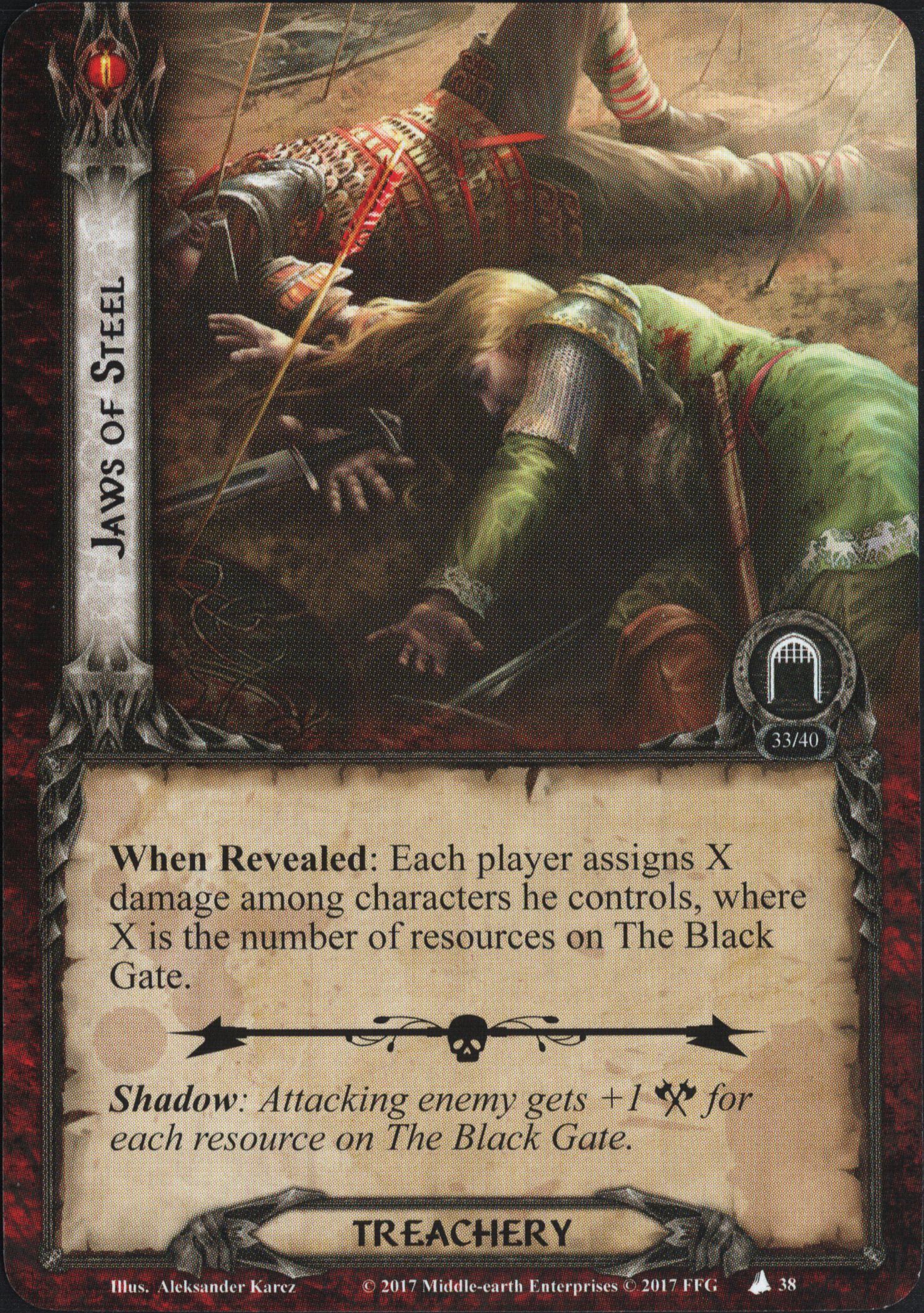 The problem with The Hour of Doom is that every time it comes up, the doomed 1 shortens your game by 1 round, meaning 1 less token. And when your token count is in the 30s and 40s, they come up a lot and end your game quickly before you can get to the 50s or 60s.

The problem with Jaws of Steel is surviving it when you need to be dealing out 60+ direct damage multiple times per quest phase.

Only 4 of these 5 cards can be removed from the deck using 3x Out of the Wild and 1x Scout Ahead (using Lay of Nimrodel to complete it), so there is still one problematic treachery that must be dealt with.

Once we pass 50 tokens, we be cycling through the encounter deck 6 or 7 times, every round. How can we keep up with that many must-cancel treacheries?

The key piece of tech here is not a player card, but in fact another encounter card: Rage Filled Him. 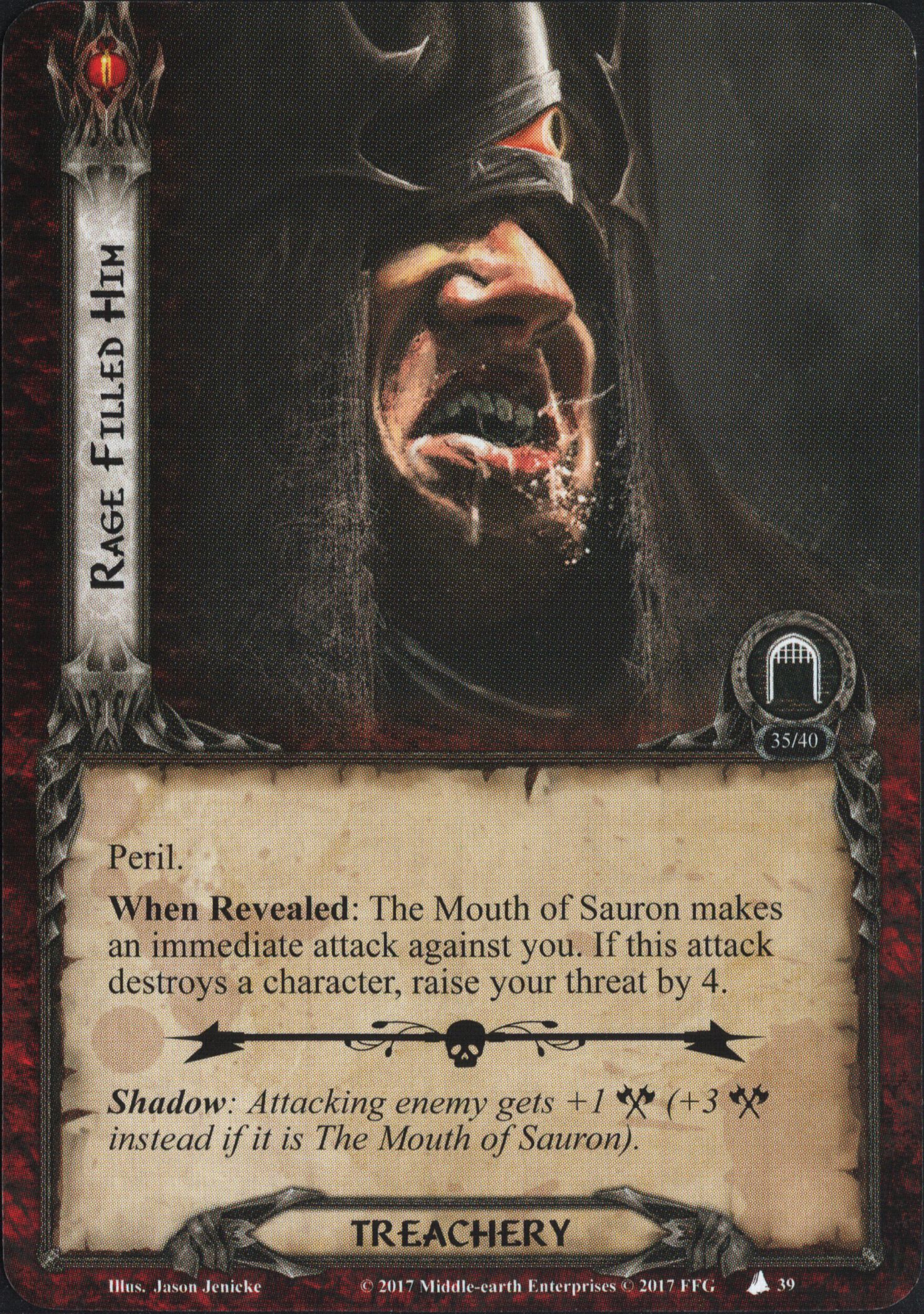 There are 3 of these in the encounter deck. They present no danger to Gloin, who takes the attack undefended and heals it right off. But they provide something critical: action windows during the staging step.

Every time we cycle through the encounter deck, we will be seeing roughly 3 of these attacks for every 1 time seeing the problematic treachery. In these action windows, we could use a card like The White Council to shuffle a cancellation card like A Test of Will or The Door is Closed! back into our deck, and Elven-light to draw it up.

With this in mind, there are a couple different ways we could handle the problematic treachery:

Once we are in the high token counts, things generally look like this:

In the best case, the encounter discard is empty and the encounter deck has 24 cards in it. Of those cards, 3 of them make the Mouth attack (requiring a shadow card), and 3 of them surge. So the effective size of the encounter deck is actually more like 24 - 6 = 18. Once those 18 are up, you start cycling through the same 9 treacheries over and over, 1 of which is The Hour of Doom, which we are prepared to cancel up to 7 times if necessary.

The last thing to think about is Nori. Does he have enough opportunities to attack each round to recycle all the cards we want recycled? Well, apart from the 6 enemies that stay in play, Nori will kill 14 enemies each round. This is enough to keep up with 1x Ever Onward, 1x Hour of Wrath, 3x The Door is Closed!, 3x The White Council, the Galadhrim Weaver (killed off by archery), Stand and Fight, and at least 4 attachments discarded by the Hour of Doom's shadow effect.

It is difficult to significantly improve on this result with this hero lineup. With a starting threat of 31, and 6 threat from the Uruk Soldiers, bringing the effective starting threat to 37, there absolute maximum number of tokens achievable with this lineup is 63. The difference of 3 between the maximum and my result of 60 is due to not having Galadriel out yet in rounds 1 and 2, and facing one Hour of Doom Treachery before I could get it in the victory display.

Possibly I could have tried something to prevent the Uruk Soldiers from ever engaging, like with recycling Noiseless Movement or killing them in the staging area and playing None Return. It just sounded annoying to try so I didn't do it. But if possible it would raise the theoretical maximum to 69.

To further improve on that theoretical maximum, you could build a multiplayer fellowship where one player just starts with just Gloin. Another player could have Elrond, because after getting set up, the Gloin player would no longer need Elrond's extra healing. The other player could also play another Scout Ahead to remove the last problematic treachery, and they could engage the Uruk Soldiers and None Return them. The Gloin player could rely on recycling a Galadriel's Handmaiden (killing it off with archery or a defense each round) for threat maintenance.

I think this would give a theoretical maximum of 91 tokens. Unfortunately Sword-thain is unique, and we really need Nori as a hero controlled by the Gloin player, otherwise you could start with Sméagol, play Glóin ally, put Sword-thain on him, then Thorongil his hero ability onto him.

Thanks for reading this far! This was a fun game and exercise, and if you have any other suggestions feel free to drop a comment!