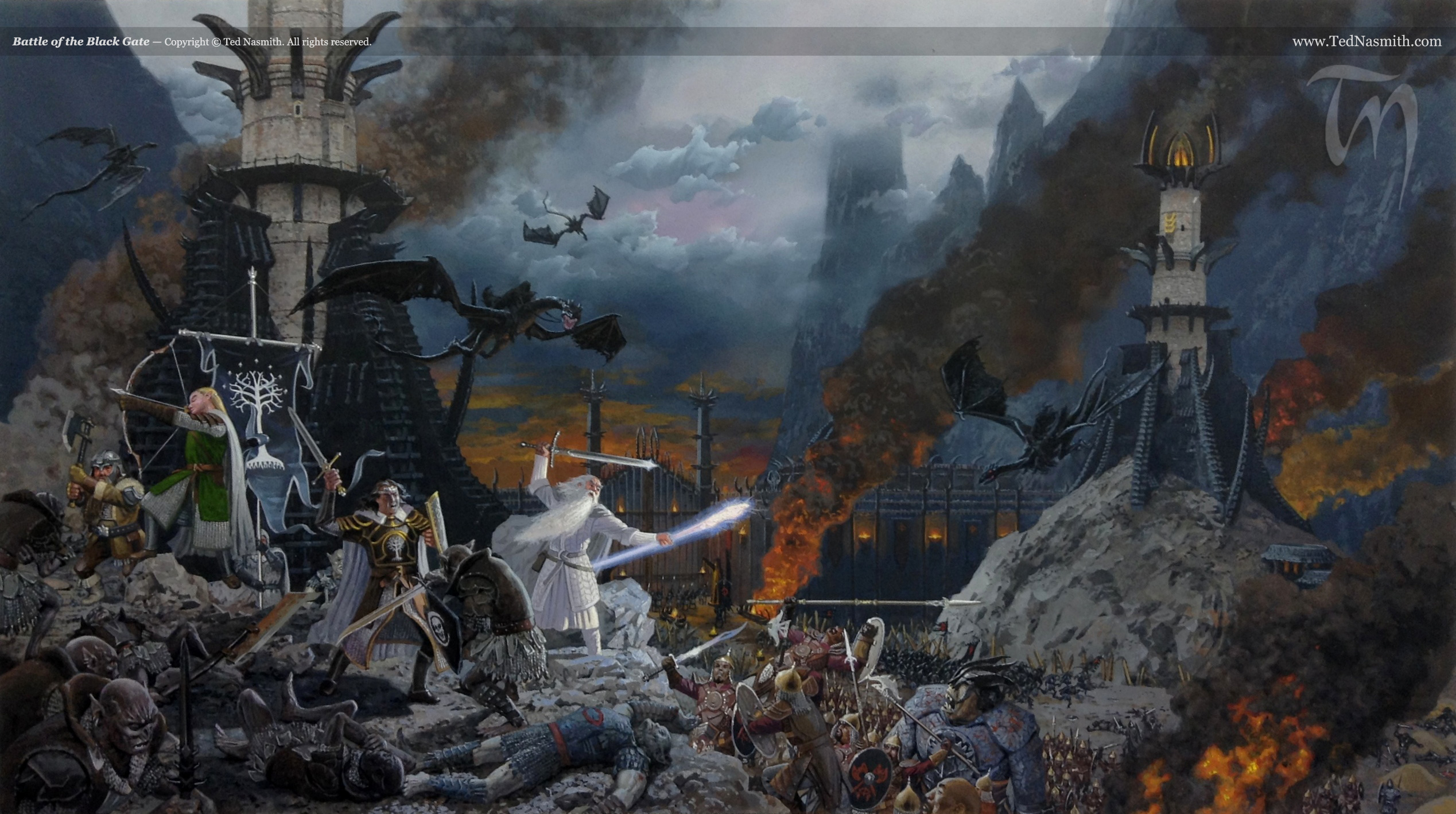 The Concept / The Decks

The Black Gate Opens is the unwinnable scenario. In my opinion, it's kinda weird and doesn't scale very well with the number of players. A good result at this scenario is considered to be 8 to 10 rounds, barring Seastanigans or Seastaniningans. With 10 turns as a solo player, you'd be revealing n*(n+1)/2=55 cards, for 5.5 cards average /turn/player. Two players 65 cards, so 3.25 cards /turn/player. Four players 95 cards, so 2.375 cards /turn/player. Although that doesn't account for Surge, you can see the issue in numbers, especially since there aren't nasty scaling treacheries around.

So my goal was to obtain at least 10 resources on The Black Gate. In order to reach that goal, I came up with the simple plan:

1) Use a suicide combo deck using Bilbo Baggins, Beravor and Denethor to generate a bazillion of resources that would be sent with Parting Gifts to the second deck. To get that deck rolling, we needed to survive 2 turns (and suicide on the 3rd). Suicide is ok and you won't get a threat penaly in Mount Doom because The Black Gate's Resolution reads:

Resolution: Record the number of resource tokens on The Black Gate in the notes section of the campaign log. If a Wraith on Wings is in the victory display, remove that copy from the campaign pool. If the first player controls Gwaihir, add him to the campaign pool. The players have earned that boon. If a hero is in its controller's discard pile, do not add that hero's name to the list of fallen heroes.

Planning Action: Until the end of the round, players do not raise their threat from questing unsuccessfully.

It allows us to not quest at all! Yes, you are still revealing cards, nasty treacheries, locations and enemies, but:

Valour Planning Action: Raise each player's threat by 2 to skip the quest phase this round.

Lore Bilbo at the Black Gate "How To"

Draw as much as you can with Bilbo Baggins, Beravor, Daeron's Runes, Mithrandir's Advice, We Are Not Idle, Drinking Song, Peace, and Thought and Justice Shall Be Done (to be timed well, and maybe not even used). If yo use Justice Shall Be Done, be careful to use it on the turn you are the first player, because Aragorn will change controller before you are eliminated and you don't want to control him when you are, or you'll lose! That's actually quite nice, because you will also get 3 resources there. Oh, don't forget also you can play Old Bogey Stories if need be.

Your main goal is to:

Your secondary goals are:

At this point, you should be piling up on resources, and you can get more with Tighten Our Belts, Wealth of Gondor and Gaining Strength.

The combat deck should have 6 more cards and 9 more resources already thanks to your Doomed events, and as a final move before you die (take some undefended attacks!) send some Parting Gifts to Elrohir. On our playthrough, I sent more than 30 of them, I don't exactly remember.

Get your combat stuff rolling quickly, you are going to need it. Use Elven-light and Éowyn to draw agressively, you have three missions:

As a fun fact, 12 turns is all you need to draw your whole deck, ensuring you can play Doom Hangs Still nine times: Nb of cards drawn = 6 (starting cards) + 2 (embassy at the Black Gate, technically not drawn, but discarded. With luck, those are some Elven-light. If Doom hang Still is discarded => scoop) + 6 (from Deep Knowledge) + 9 (from Foe-hammer) + 3 (from Open the Armoury) + 2 (Beravor before she dies draws 2 cards during the Refresh Phase action window) + 12 (Resource Phase auto-card) + 1 (Bilbo on turn #2) + 12 (use of Elven-light) = 53 cards (LOL). The Glamdring Boon (played by Bilbo & cie) on Aragorn can get you there a bit earlier.

Open the Armory is nicer than you think, as a way to reshuffle your deck after you placed Doom Hangs Still at the bottom of your deck after having played it from Tome of Atanatar.

The Black Gate Opens: 1/1 ~ Result: 12 resources on The Black Gate. Gwaihir is in the Campaign Pool and the Wraith on Wings have been eliminated!

+1 starting threat for each player (change of heroes at the beginning of The Uruk-hai).

From The Passing of the Grey Company onwards: +2 starting threat for each player (choice at the end of The Passage of the Marshes).

Number of resources on The Black Gate: 12.

Enemies under the Black Gate: