Attach to a hero with the printed Ranged keyword. Restricted.

Combat Action: Choose an enemy in the staging area. Exhaust Great Yew Bow and attached hero to make a ranged attack against that enemy. Declare attached hero as the attacker. No other attackers can be declared for this attack. 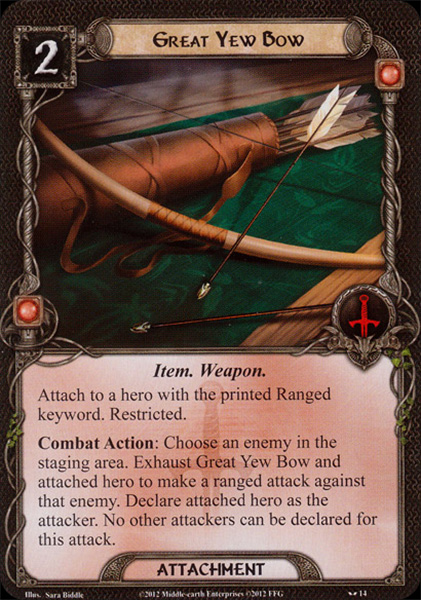 A fun card, but also one of the most difficult cards to use well. It can generally be frustrating that the staging area attack shenanigans (This, Dúnhere and Forth Eorlingas!) are so difficult to pull off, but that's actually quite fair if you observe how powerful they are if you succeed, since you completely avoid the need to defend and handle shadow effects from that enemy before killing it. It's like a free Feint every time you do it.

That being said, this is, again, a very difficult card to use well. Like Forth Eorlingas!, it's a combat action, so the enemy needs to still be in the staging area in the combat phase. It's explicitly called out that no other attackers can join in and help you so you need to stack all that attack power on a single hero to get the kill - made more difficult by the fact the Bow is restricted. And it requires a printed Ranged keyword, which sharply limits your options, disallowing options where you might play it on anyone with a Dúnedain Cache or Rivendell Bow. Let's examine these limitations one by one.

All in all, the Great Yew Bow is, without wishing to sound like a broken record, a very difficult card to make good use of, with some difficult limitations to work around. On the other hand, the power and fun factor of staging area attacks should not be underestimated if you can manage to jump through all the necessary hoops, and there are definitely more viable options for using it than people may think. If you have dismissed this card in the past then I would say it may be worth reconsidering it and taking up the challenge of making it work. It can be done!

Warden of Arnor 5139
You mention there are 3 ways to have enemies in the staging area during combat; I'll mention a 4th. If you're playing a quest where enemies can be bounced back to the staging area often via a forced or shadow effect, this card can be a lifesaver. I've been using it during the Dwarrowdelf cycle against Mountain Wargs to great satisfaction. Otherwise, bounce back to staging effects can be very annoying as you may have to deal with their threat and attacks round after round. Worth considering this card if you're up against such a quest. — Quetzal513 73 7/27/19
2

The Great Yew Bow is a tricky card to use no doubt about that. It takes up a restricted slot, decreasing your available attack power, requires the enemy to still be in the staging area during the combat phase, costs 2 and must exhaust so it can't be used more than once in a round.

But all that being said the ability to never have to engage an enemy and instead just stealthily take them out one at a time is too good to pass up. There are many ways to keep or put an enemy in the staging area but the best is keeping your threat low, so this card shines best in solo where you can control threat much better. It's great on Bard but I like it more on Legolas for how it combos with his other two Elven bows to create a +6 attack each round which can kill or pepper most enemies.

It also works great with the thematic Black Arrow to take out that one pesky super enemy each game.

So keep your threat low in solo. Or use your Lore trickery, but definitely give this bow a go.

Here is a sample deck I've been having a lot of fun with this card in:

This is one of my favorite attachments in the game, even though its power level is a bit lacking. The problem with the effect is that pesky Combat Action! This means that you have to wait until after engagement checks are made to use it, meaning that you have to either have low starting threat, or an insane amount of threat reduction to reliably use this card.

jodudeit 24
I love the concept of this card, but for the life of me have never been able to make it work in a deck. Since it almost requires low threat to work, I tend to splash it into decks that are not predominantly tactics, in which case it can get be a bit pricey. I though it would be a good fit in my Faramir Ranger/Trap deck, but find by the time I get a song of battle out and pay 2 resources, I could have already used several ithilien pits to more easily take down staging enemies. I really want to like this card, but guess I haven't figured out how to use it. — MDuckworth83 3054 3/31/16
1

"I need to kill fast, and Great Yew Bow too slow" - John Freeman

Great Yew Bow might fit a certain narrow archetype, say, a threat-reducing deck that's running Bard the Bowman, but I can't think of many cases where I wouldn't rather be using Hands Upon the Bow. That card gives you the same snipe effect, doesn't take up a restricted slot (so you can wield double Bow of the Galadhrim or Dagger of Westernesse for +4,) and even gives you a bonus +1 to attack, which makes it a lot more likely you'll actually kill something. While Great Yew Bow has the advantage of long-term reuse, you'll have to take multiple turns to kill most enemies above weenie level, which won't cut it when the threat is piling up. If sniping the staging area is going to be your main strategy, you might also consider just adding Haldir of Lórien to your team, which will give you access to Lore's various tools for keeping enemies in the staging area.