Thies 44
Agreed on all counts. Another unfavorable comparison would be to Westfold Horse-breeder, who has a similar action but digs 10 cards deep and for one less resource. — SchadenfreudeNE 7/22/21 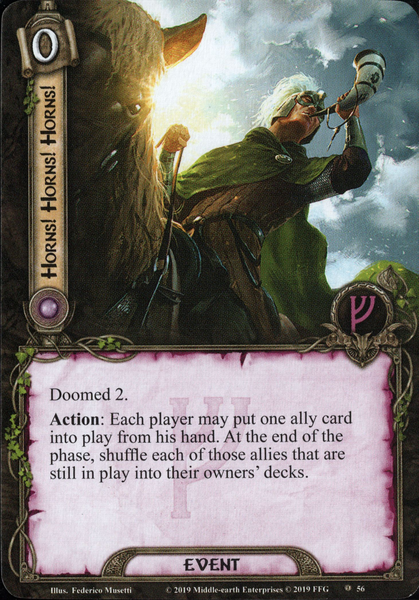 This card may be free, but outside of the threat increase, there is another hidden cost : to the difference of Sneak Attack or Reinforcements, the allies do not come back in hand, so you loose a card in the process.

If you are playing with Vilya (or Gandalf without Wizard Pipe), this can be a solution to shuffle back an ally that you couldn't play directly. It can also save a card from Erestor forced discard (the event having 0 cost beeing easy to play), but usually you prefer to keep your cards in hand.

Of course, you can also get away with it : a free Gandalf is still worth for example.

Saruman's Staff can mitigate the threat cost, so Saruman can use this card as a super sneak attack to ready him.

Rohan have a lot of discarding abilities that you can use without fear on a 0-cost ally (for example Háma or Helm! Helm! ). The Horn of the Mark can also give you a card after the ally has left play. And playing Rohan is totally thematic with the card.

Horns! Horns! Horns! can also find a use in a silvan deck ; bringing a Rúmil to destroy an ennemy before bouncing it back in hand (with The Elvenking or an event like Island Amid Perils).

Other interesting allies are eagles (use Meneldor or Descendant of Thorondor to remove an ennemy or a location before readying Gwaihir and/or buffing Eagles of the Misty Mountains) or beornings (you can trigger Beorn or Giant Bear for a powered combat phase).

The effects of this card scale well in multiplayer, just remember that not everyone can play Gandalf at the same time. 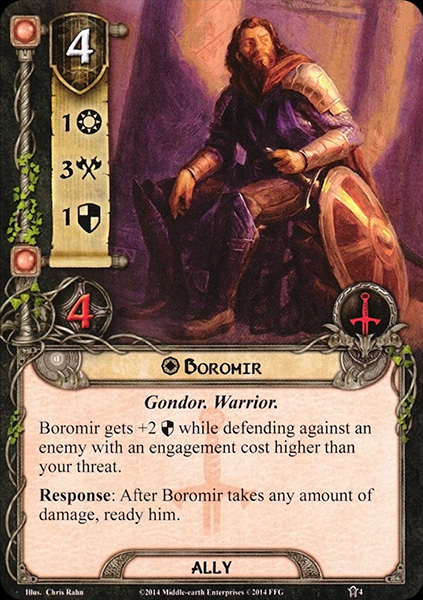 While I love Boromir, this ally is unfortunately harder to use than I would like. The statline is pretty great, honestly. 4 resources for 1-3-1 is a pretty common statline, although expensive in tactics. And the 4 health is almost unheard of for allies unless you're an Ent.

But the abilities are of course the real bonus. The ideal turn for our friend here would be:

1a. Take a point of archery damage to ready.

2a. Take another point of damage

The trick is that the key parts of this strategy are 1a and 2a, and you can't really control these things. Not every scenario has direct damage. And the defend is worse considering shadow cards. Would you rather defend a 2-3 atk enemy and hope for a strong shadow card or defend a 4-5 atk enemy and hope for a harmless shadow card (assuming his defense ability triggers)? Having him accidentally die is bad but we also can't rely on him readying for an attack necessarily.

So ultimately, I think Boromir is actually best for high direct damage scenarios, where you can get several 1 willpower 3 attack turns out of him with archery. I think you can be pretty happy with that for 4 resources. But if you're hoping for more, and trying to use him to chain defenses using his readying ability, I think that's too risky to pull off and you're better off using defensive tools on heroes 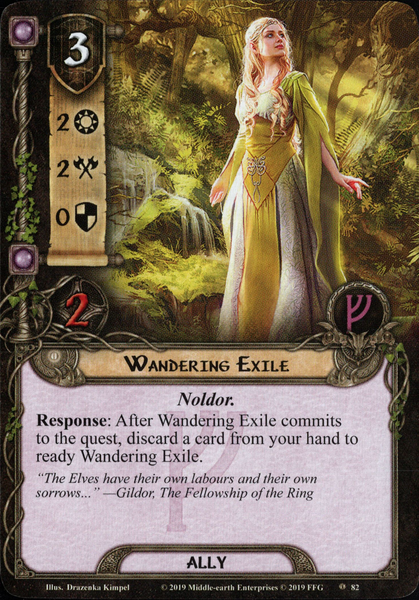 Great stat line for a decent price. Fits perfectly into any Noldor deck that runs leadership and its ability is a great fit for the stats. It's not even unique so you could be questing for 4 or 6 and attacking for the same with just 2-3 cards on the table. Really efficient, especially with a steward/elven light combo. I'm adding 3x to my Noldor deck as soon as I can pick up the AP.