Response: After a player engages an enemy, reduce his threat by X, where X is that enemy's printed .

...the Captains of the West were well warned by their scouts...
The Return of the King
Unknown

The Sands of Harad #8. Spirit. 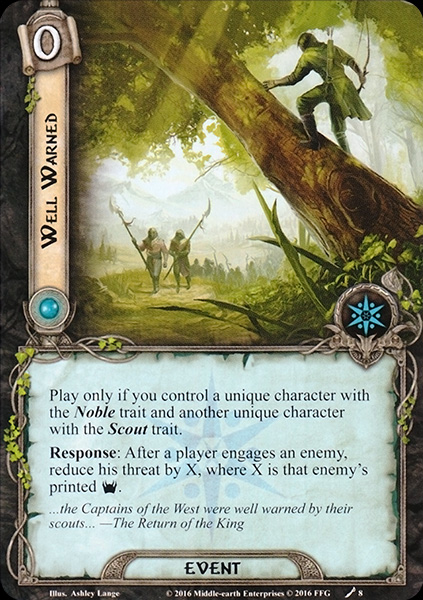 While that may look like a lot, it really isn't. In my opinion, I would never play this card, unless I had a scout hero, because it's too much steps to get out a scout ally. All of the unique scout allies are around 4-5 cost (with the exception of Ceorl. Below I will list all of the noble heroes and unique allies:

And... I think that's it. As you can see having a noble unique character isn't that hard. Now this card has saved me a couple times before. Threat reduction is important in this game. And this is essentially an Elrond's Counsel except without the boost and you have to engage an enemy to trigger it. When I play this card I like to save it for 4-5 threat enemies if I can.